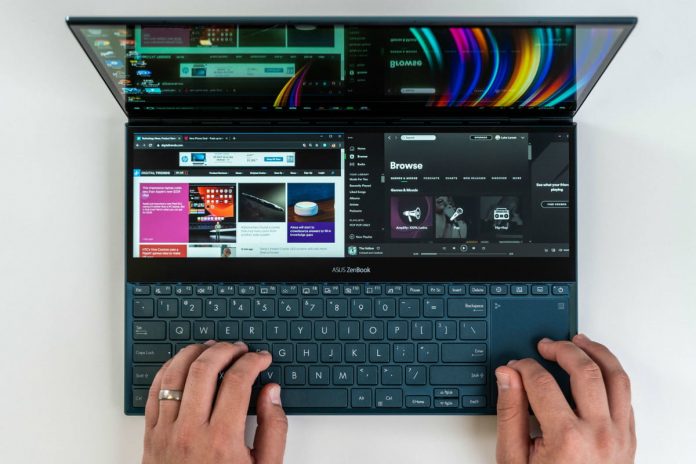 “The ZenBook Pro Duo pairs an awesome dual-screen design with the performance to back it up.”

The dual-screen laptop is an idea whose time has come. No longer left to the fantasy world of concept products, laptops with two screens are a reality.You can buy them. As in, there’s more than one available.

It has a luxurious 4K touchscreen stretched out across the keyboard deck that feels limitless with potential. More than that, the ZenBook Pro Duo has the performance chops to back it up. That’s what makes it more than an oddball experiment.

Dual-screen laptops spark one of two reactions from passersby. Wondrous imagination, or skepticism. People imagine themselves multitasking away, opening apps to their heart’s content… or they shake their heads at its sheer excess and wonder how anyone could need that much screen in their face. Asus is targeting the first crowd without hesitation or apology.

Unlike the MacBook Pro’s squat Touch Bar or the HP Omen X 2S’ smartphone-sized screen, the ZenBook Pro Duo’s second screen is edge-to-edge. It fills the entirety of the top half of the keyboard deck, and with 3,840 x 1,100 resolution, it’s super sharp. You might be puzzled by the ultra-wide aspect ratio at first glance, but it’s perfect for pinning two windows or apps side by side. It’s a multitasking fantasy come true.

My first reaction was to drop down Simplenote and Spotify, giving me cursory looks at my music and my to-do list for the day. Detailed work like typing or reading isn’t ideal, though. Despite the larger size and matte finish of the screen, I had to hunch over to type Slack messages or read articles. It’s not as bad as the flat Omen X 2S, but the second screen is best left for less pertinent information.

The ZenBook Pro Duo has potential, though it requires some workflow adjustment.

Judging by the price and powerful components inside, the ZenBook Pro Duo isn’t just targeting people who want to multi-task Word documents. It’s for content creators. The second screen can help there, too.

A photographer or video editor might want to use it for their timeline, media library, or toolbars, to clear out some real estate on the primary screen. The ZenBook Pro Duo has potential in these scenarios, though it requires a healthy amount of workflow adjustment.

Asus has some other ideas for how you can use the second screen. One mode lets you extend the primary display down to the second as if it were one, long screen. It’s a cool party trick, though I didn’t find it all that useful.

Handwriting and drawing, on the other hand, is perfect for the ZenBook Pro Duo’s screen. Like writing on an iPad, the flat surface is more natural position than a laptop’s vertical screen. The Asus Pen is included in the box, as well as a basic Handwriting application. Artists should find plenty to love about having a flat surface to sketch and write on.

Another helpful feature is Task Groups, which lets you save a set up of windows that you might want to come back to and toggle through them. Windows isn’t always good at saving your split screens and open apps when you unplug your monitor or shut your laptop. Task Groups makes sure you pick up your work right where you left off.

As gimmicky as it might sound, I enjoyed the second screen. It made me feel more productive, and when I returned to my XPS 15, I found myself missing it.

If all that were true and nothing else, you’d already have a case for an interesting laptop. Add in the ZenBook Pro Duo’s incredible performance capabilities, and you have something that could function as a proper workstation for a creative professional.

Its success as a content creation tool comes down to two things. The option for the powerful eight-core Core i9 processor, and the color-accurate OLED 4K panel.

Let’s start with the Core i9. I’ve tested it in a number of laptops this year; the MacBook Pro, the Dell XPS 15, and now this. This experimental laptop is the most powerful of the three, especially in video rendering and editing.

I was already impressed by the Dell XPS 15, so I was surprised the ZenBook Pro Duo is even faster. Both laptops have same Core i9-9980HK processor and 32GB of RAM, yet the ZenBook finished the same task in Premiere Pro 36% faster. In real terms, it was over a minute and a half faster in the same 2-minute 4K ProRes 422 export. I chalk up the ZenBook’s lead to its better GPU (the RTX 2060 compared to the GTX 1650) and more efficient cooling.

It’s not the sleekest design, but thicker chassis pays off in performance.

The ZenBook provides better ventilation. Intake vents flank both sides of the chassis, and the ErgoLift function props up the base of the laptop off the table when it’s opened. It’s not the sleekest design, but it pays off in performance.

On the downside, the ZenBook Pro Duo has a much thicker chassis than the XPS 15, at close to an inch thick. If portability is paramount, this five and a half pound laptop isn’t for you. Dell’s XPS 15 and Apple’s MacBook Pro 15 aren’t as quick, but they’ll put less strain on your back when hauled through an airport.

Let’s not forget about the screen, which is equally important for content creators. What good are fast render times if you can’t trust the colors you’re seeing on your screen? We’ve seen some OLED laptops be overly saturated to make the colors stand out more in games, such as on the Razer Blade. That’s not the kind of screen you want to edit photos or video on, though.

Asus has tuned its 4K OLED panel — the same one that a lot of laptops are using today — for accuracy first. It’s bright, it fills 100% of the Adobe and sRGB color spaces, and it’s super color accurate. That makes it a fantastic tool for content creators who rely on making precise color adjustments according to what they see on the screen.

On top of all that, it’s a decent gaming machine when it needs to be too. Even though the ZenBook Pro Duo isn’t a dedicated gaming laptop, lacking important features like a high refresh rate or G-Sync, the RTX 2060 is a solid GPU.

The system produced decent framerates once I dropped the resolution down in most games. Over 60 FPS in Battlefield V or Fortnite at max settings was no problem at all. So yeah, do some gaming on the side if that’s what you’re into.

The compromises are many

The ZenBook Pro Duo does make a few sacrifices.  The first is ports. The selection isn’t horrible, but you get the basics. There’s one USB-C/Thunderbolt 3, two USB-A, and HDMI. An SD-card slot is missing. For a laptop made for content creators, its absence is missed.

Another letdown is the overall look and feel of the laptop. It could have used more attention. Did it have to use the now all-too-familiar ZenBook lid? When you have it open it from the front, the futuristic vibe stands out. But from the back, it resembles ZenBooks sold at half the price.

It’s sturdy. I just wish it had a sense of style.

Its biggest sin, however, can be found below the screens.

The keyboard is fine. It’s quiet and has enough travel that the keys don’t feel mushy. There’s some nice back-lighting with a few stages of brightness. It’s a-ok.

As a workstation, it’s one of the most innovative computers I’ve ever used.

The touchpad is where the problems are. Crammed in beside the keyboard instead of below it, the touchpad feels inconvenient and and uncomfortable to use. It’s not the worst I’ve used in terms of tracking, but it’s not meant to be used all that often. And if you’re left-handed, well, you’re screwed.

Battery life is another sore spot. I don’t have high expectations for 15-inch 4K laptops as powerful as the ZenBook Pro Duo, but it only manages 4 to 5 hours of light use. That’s below the category average and reinforces the fact this laptop makes a poor travel companion.

The ZenBook Pro Duo is niche laptop meant for a small audience. If you don’t have the need for extreme power, the two screens alone won’t be worth shelling out $3,000. However, if you’re a video editor who loves the idea of some additional screen real estate, the ZenBook Pro Duo is a one-of-a-kind laptop.

Are there are any alternatives?

In terms of a content creation laptop, the best alternative is the Dell XPS 15. Though it’s not quite as fast as the ZenBook Pro Duo because of its thinner profile, it’s a capable video editing laptop with the same beautiful OLED screen.

The ZenBook Pro Duo has up-to-date components and plenty of helpful ports that should futureproof you in the future. The ZenBook Pro Duo comes with a standard one-year warranty, which isn’t a lot for a laptop this expensive. It’s standard, however,

Yes. I don’t recommend a $3,000 laptop casually, especially not one as unorthodox as the ZenBook Pro Duo. Still, if the dual-screen concept looks useful to you, buy it. This is by far the best execution of the idea available so far.