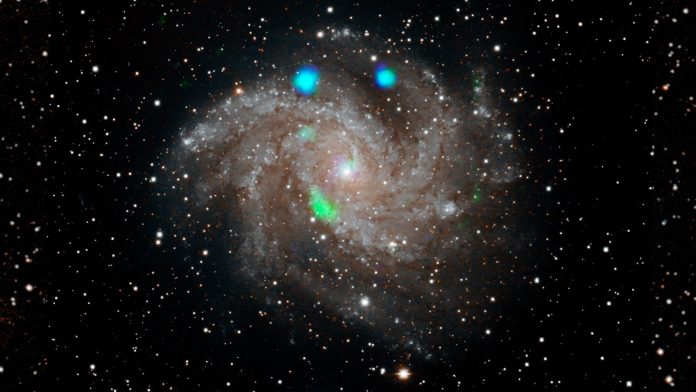 This visible-light image of the Fireworks Galaxy (NGC 6946) comes from the Digital Sky Survey and is overlaid with data from NASA’s NuSTAR observatory (in blue and green). NASA/JPL-Caltech

Using X-ray data from NASA’s NuSTAR space observatory, astronomers looked to the delightfully named Fireworks galaxy (NGC 6946) and compared the X-ray sources (shown in blue and green) to the visible light sources (the many stars shown across the image). They were aiming to study a supernova that was occurring in the galaxy and which shows up as the bright blue spot in the upper right.

But while they were collecting data, they noticed something odd. The green blob on the bottom side of the image wasn’t there in their first observations but was seen clearly in a second observation only ten days later. And then in the next set of observations, it was gone again. This is very unusual for a luminous X-ray source, and it wasn’t accompanied by a corresponding increase in visible light so it couldn’t be another supernova. It was a puzzle the researchers wanted to investigate.

“Ten days is a really short amount of time for such a bright object to appear,” Hannah Earnshaw, a postdoctoral researcher at Caltech and lead author of the new study, said in a statement. “Usually with NuSTAR, we observe more gradual changes over time, and we don’t often observe a source multiple times in quick succession. In this instance, we were fortunate to catch a source changing extremely quickly, which is very exciting.”

Earnshaw’s study suggests that the source of the X-rays could be a black hole that was devouring a nearby star. As material is pulled into the black hole from the disc of matter around it, it becomes extremely hot and radiates X-rays. This process usually goes on for a long time because black holes feed on stars gradually. In this case, it could be a black hole gobbling up a small star all at once.

There’s another possibility though. The X-rays could be coming from a neutron star, which generates magnetic fields that are strong enough to channel materials to its surface. If a neutron star spins very fast, the magnetic fields can act like a barrier that stops material from falling onto the star. “It would kind of be like trying to jump onto a carousel that’s spinning at thousands of miles per hour,” Earnshaw explained. The barrier might be stronger at some times and weaker at others, and when it is weaker it could allow matter through which would show up as X-ray bursts.

The findings are published in the Astrophysical Journal.