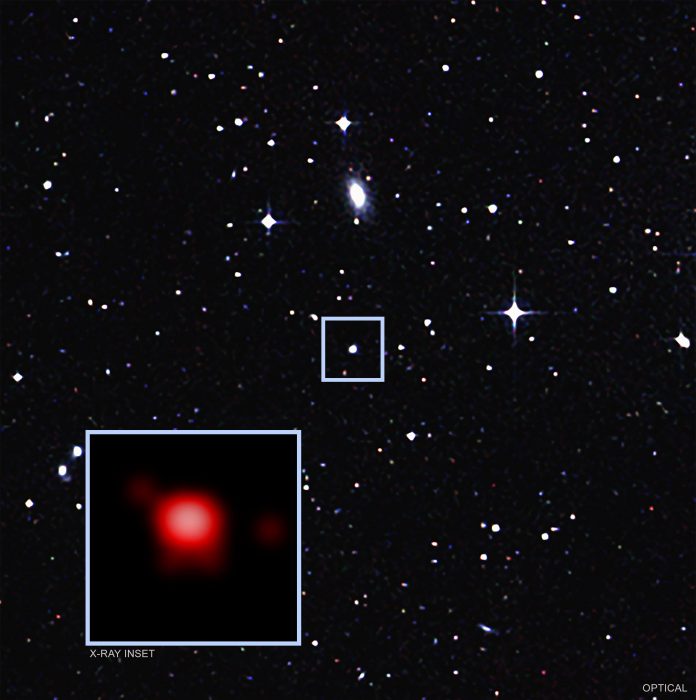 X-ray bursts repeating about every nine hours have been detected originating from the center of a galaxy called GSN 069. X-ray: NASA/CXO/CSIC-INTA/G.Miniutti et al.; Optical: DSS

We all know we should be getting three square meals a day. And now astronomers have found a black hole which seems to share this preference — it consumes material on a regular schedule of once every nine hours.

Using data from NASA’s Chandra X-ray Observatory and the European Space Agency (ESA)’s XMM-Newton observatory, the researchers found the black hole in a galaxy called GSN 069 and saw it emit bursts of X-rays which repeat in a regular pattern. The bursts of X-rays indicate the black hole is consuming dust and gas from nearby stars, but it is very unusual to see this happening on such a regular schedule. Around three times a day, the black hole is eating through an amount of material equivalent to four of our moon.

“This black hole is on a meal plan like we’ve never seen before,” Giovanni Miniutti from ESA’s Center for Astrobiology in Spain, lead author of the paper, said in a statement. “This behavior is so unprecedented that we had to coin a new expression to describe it: ‘X-ray Quasi-Periodic Eruptions’.”

“By combining data from these two X-ray observatories, we have tracked these periodic outbursts for at least 54 days,” co-author Richard Saxton of the European Space Astronomy Centre said in the same statement. “This gives us a unique opportunity to witness the flow of matter into a supermassive black hole repeatedly speeding up and slowing down.”

The findings are published in the journal Nature.