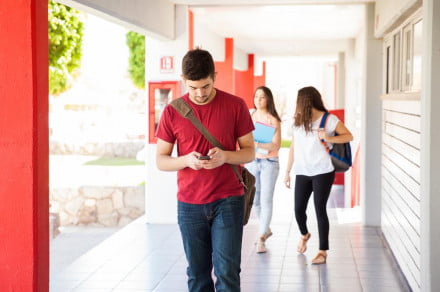 If you have Netflix on your Android phone, watch out: The streaming service might be watching your every move.

In late July, a security researcher noticed that Netflix’s Android app wanted access to his physical activity data, prompting The Next Web‘s Ivan Mehta to conduct a quick investigation. Not only did Mehta confirm that Netflix was accessing the activity data on his Pixel 3 XL, but found that the app was doing so without asking for permission first.

But why? In a statement, Netflix confirmed that it was conducting a test “to see how we can improve video playback quality when a member is on the go,” and claimed that physical activity data was only being tracked for a small number of users. “Only some accounts are in the test, and we don’t currently have plans to roll it out,” Netflix said.

The common consensus seems to be that Netflix is using a feature introduced in Android Q, the newest Android operating system, to improve streaming and buffering for users while they’re traveling. Ostensibly, Android Q’s new physical activity recognition hook is designed to track step counts or “classify the user’s physical activity” to figure out if someone is using an app while walking, biking, or riding in a vehicle, but testing it to provide better video for users outside of the home seems to be a legitimate use, too.

Still, tracking a customer’s physical activity without letting them know feels shady, and with good reason. Just a few weeks ago, the Federal Trade Commission published a study that found over 1,000 Android apps, including big names like Shutterfly, were logging geolocation data and other sensitive information without permission. Google does it, too.

Now, skimming geolocation data isn’t quite the same as spying on your step counts, but in a world where personal data like the kind Netflix is gathering is increasingly valuable, it’s hard not to feel like this is a violation, even if Netflix is just trying to make it easier for you to catch up on Stranger Things.

There’s also a question about whether or not watching Netflix while out and about is a good idea. Catching up on your favorite shows while on a long bus ride or late-night rideshare is fine, but using your phone while you drive has been proven to be extremely dangerous, and it’s not great for pedestrians, either.

Given the small scale of Netflix’s tests, you’re probably in the clear, but it never hurts to take a few minutes to protect your private data — and, for goodness’ sake, pause your videos while you’re crossing the street. The risks just aren’t worth it.