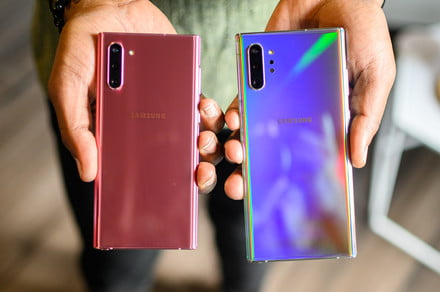 Samsung likes to release a lot of devices, so perhaps we shouldn’t be surprised the Note series now comes in two sizes: The Samsung Galaxy Note 10 and the Samsung Galaxy Note 10 Plus. There’s no doubt the 10 Plus is the headliner and the true spiritual successor to the Note lineage but does it deliver on our expectations? It’s an impressive smartphone by any measure, with a price to match, and it mostly delivers on the features and tweaks I wanted to see, but there are disappointments too.

Hold the Note 10 Plus side by side with last year’s Note 9 and it’s immediately obvious which is newer. The refined curves, the almost entirely screen front, marred only by the hole-punch camera, and that stunning Aura Glow finish are eye-catching updates. Samsung also had the good sense to kill the Bixby button and the fingerprint sensor is now assimilated into the stunning display. To fit a 6.8-inch screen into a device this size is a real achievement, though it will definitely be too big for some — that’s why you’ve got the smaller Note 10 as an option. Both are beautiful phones.

There’s no denying that Samsung’s design is refined and luxurious, but as beautiful the Note 10 and 10 Plus are, they don’t excite me. The most enticing Aura Glow finish clearly takes its inspiration from Huawei and the shift to a left-aligned, vertically stacked camera module on the back makes it look like the iPhone (though Huawei’s latest phones also adhere to this trend). Everything else that’s good about the design is done slightly better in the Galaxy S10 and S10 Plus.

The quickest way to explain this upgrade is to remind you of the switch from a mechanical hard drive to a solid state drive in computers. It’s not a perfect analogy, but the adoption of UFS 3.0 storage should speed up performance and reduce power consumption — it’s twice as fast as the last standard and uses significantly less power.

It will also prove increasingly handy in the future as we play ever more demanding games and watch higher quality videos. If you’re going to drop this much on your phone, you’re entitled to expect a bit of future-proofing and UFS 3.0 delivers it.

Samsung has been lagging behind in terms of wired charging speed for its smartphones. We likely have the Note 7’s battery debacle to blame for Samsung’s charging speed conservatism, but the Galaxy Note 10 and 10 Plus represent a real step up at last. The Galaxy Note 9 topped out at 18W for fast charging, but the Note 10 and 10 Plus come with 25W chargers in the box, which means a full charge can be had in around an hour. Even better, the Note 10 Plus supports super-fast charging at up to 45W with the right kit. That means, even if you forgot to plug in last night, a quick half-hour charge while you get ready in the morning should be enough to see you through the day. Now that’s more like it.

I don’t like the need to buy a fast charger

If you’re going to offer 45W fast charging and highlight it as a feature, then supply the charger in the box. You’re already asking us for at least $1,100 for this phone, surely you can supply the best charger along with it. This is one page I’d rather Samsung didn’t take from Apple’s playbook. It’s also disappointing the 45W charger isn’t compatible with the regular Note 10.

The Note 10 boasts a 12-megapixel main lens with a variable f/1.5 to f/2.4 aperture and optical image stabilization, a 12-megapixel f/2.1 telephoto lens (with OIS), and a 16-megapixel ultra-wide-angle lens with an f/2.2 aperture. It’s a similar setup to the S10 range, but the telephoto lens has a wider aperture which should make for better low-light performance. The Note 10 Plus adds a fourth lens to the mix in the shape of a VGA time-of-flight camera that can accurately measure depth.

Samsung has also thrown in lots of video improvements to steady your footage, zoom in on the sound, and blur the background in real-time. It all adds up to an impressive bag of photography tricks.

I don’t like the loss of the 3.5mm headphone jack

You can argue about whether you need this port anymore, but the simple fact is that lots of people use it daily. Samsung said it had to remove it to slim the phone down and still make room for the large battery. Color me skeptical. The Galaxy S10 Plus is 7.8mm thin and has a 4,100mAh battery in it. The Note 10 Plus is 7.9mm thick with a 4,300mAh battery.

I have no doubt that a lot of people will be annoyed about the lack of a headphone port here, but at least Samsung is including a dongle in the box, for now (Apple did the same when it first killed the port, then quietly removed the dongle from new iPhones — coincidentally it makes a lot of money selling dongles now). Thankfully, USB-C earbuds from AKG are also included in the box.

The dividing line that really sets the Note apart from the larger S10 models is the special Samsung stylus or S Pen. Adding remote control functionality was a great move last year and Samsung has continued to work on improvements, though this year’s crop feels minor by comparison.

There’s the ability to convert handwritten notes into Microsoft Word files, the option to wave the S Pen like a wand to control some apps, and the fun AR Doodle which lets you draw all over your friend’s face without the mess. I still think putting a camera and a laser pointer into it would make the S Pen truly killer, but maybe next year. It’s good that Samsung continues to try and add to the S Pen’s utility.