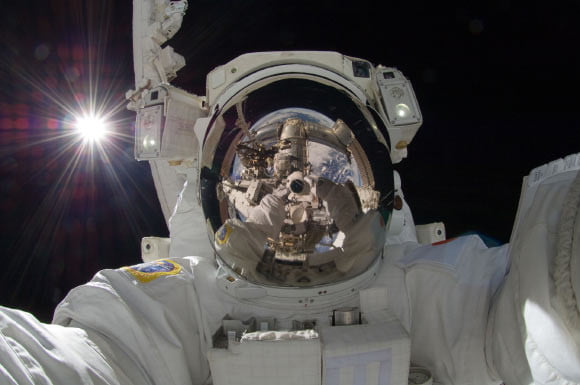 JAXA astronaut Aki Hoshide, ISS Expedition 32 flight engineer, taking a space selfie during extravehicular activity on September 5, 2012, with the Sun behind him. NASA

We already know that spending time in space has effects on the body, and recent evidence suggests it could have an effect on the mind as well. Now, a new study has examined how long-duration space flight affects connectivity in the brain.

A team from Russia’s National Research University Laboratory for Cognitive Research used magnetic resonance imaging to look at the brains of eleven astronauts before and after they were exposed to space flight and compared them to healthy controls who did not visit space. They found that the astronauts’ brains showed adaptations to an environment without gravity.

In particular, the astronauts’ brains did not receive the usual information from the bodily systems responsible for balance due to the zero-gravity environment. Their brains compensated for this by developing what the researchers called “an auxiliary system of somatosensory control.” Essentially, they relied more on visual and tactile information to maintain balance and body position instead of the vestibular system, and this change was reflected in their brain connectivity.

“Under Earth’s gravity, vestibular nuclei are responsible for processing signals coming from the vestibular system,” the team explained in a statement. “But in space, the brain may downweight the activity of these structures to avoid conflicting information about the environment.”

There were other differences in the astronauts’ brains as well. Deep inside each hemisphere of our brains in an area called the insular lobe which regulates homeostasis and is also linked to many other functions such as motor control and emotions like empathy. In astronauts, there was greater connectivity between the left and right insulae than in controls, and also greater connectivity between these lobes and other brain areas.

“Insular lobes, among other things, are responsible for the integration of signals coming from different sensor systems,” lead author Dr. Ekaterina Pechenkova explained in the statement. In particular, this increased connectivity was more noticeable among astronauts who had more difficulties adapting to the space environment and who experienced issues like vertigo or problems assessing the position of their bodies.

“We believe this kind of information will eventually help to better understand why it takes different lengths of time for different people to adapt to the conditions of space flight and will help to develop more effective individual training programs for space travelers,” the researchers said.

The findings are published in the journal Frontiers in Physiology.