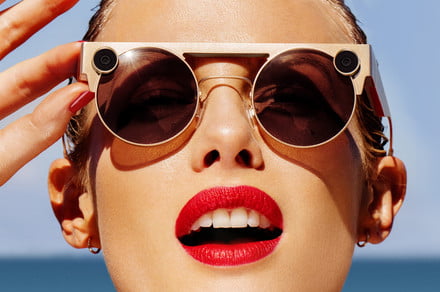 Snap Inc. announced new Spectacles sunglasses on Tuesday, August 13, that let you capture your world in a 3D view.

The Spectacles 3 glasses have two cameras on both sides of the frames to capture depth and dimension, similar to how our eyes see the world, so your followers can see things from your perspective.

Snap also said that there are new “augmented reality creative tools” to add to your snaps.

“It’s easy to reimagine your favorite moments with a suite of new 3D Effects. Create your own magic moment, or add new lighting, landscapes, and other magical effects to an entire scene with a swipe,” Snap said in the announcement.

Aside from two cameras, the new Spectacles also come with four built-in microphones and are made out of stainless steel rather than plastic. The Verge reports that photo resolution is 1642 x 1642 pixels and video resolution is 1216 x 1216 pixels. The Spectacles can hold 100 videos or 1,200 photos in storage.

The Spectacles case also doubles as a charging case and can charge Spectacles on the go. Color choices are “carbon” (black) and “mineral” (beige). For those that want to get their hands on the Spectacles 3, pre-orders start at $380. Snap said that they would ship this fall.

Snapchat Spectacles have come a long way since they first debuted in 2016. The first generation of the Spectacles was only available to purchase at specific vending machines that popped up around the country. Those ran for $130, but because of limited availability, were reselling online for up to $3,000. You can now purchase them on the Spectacles website for $150.

Spectacles 2 debuted last September with more features than the original version, including the ability to take still images, being water-resistant and coming equipped with two microphones for better audio quality. The second-generation Spectacles are priced at $200.

Despite pushing for their popularity, it was reported that Snapchat overestimated the original demand for the first-generation Spectacles and was left hundreds of thousands of unsold units.

A major compliant Spectacles users have had in the past is the fact that the glasses are not synced up directly to Snapchat. Instead, you have to upload your photos and videos via Bluetooth sync (which can be slow) to your phone where you can then edit and post.