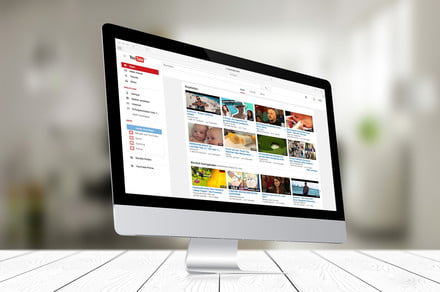 When it comes to YouTube and the rankings of its most popular videos, you’ll most likely think of it in terms of how many views or likes a given video receives. But just because a YouTube video happens to have a ton of views or millions of likes, that doesn’t necessarily mean it’s protected from receiving dislikes. In fact, some of the most popular and well-known viral videos on YouTube also carry staggering numbers of dislikes as well.

If you’ve ever been curious to know which videos have received the most dislikes, here’s your chance to find out. Here are the current ten most disliked videos on YouTube.

It’s basically a three minute video featuring what appears to be a YouTube creator trying to find different ways to destroy a silver Play button award they received from YouTube for reaching 100,000 subscribers.

Beyond that, we’re not actually sure about what else is going on in this video or why they’re destroying an award from YouTube. And we’re not sure about it because the entire video is in what appears to be Portuguese and YouTube’s Auto-Translate closed captioning feature wasn’t much help. “Cortando O Botão Do YouTube” was published on December 22, 2015 and currently has over 27 million views and 866,000 likes.

For a nearly four minute music video there’s a lot to unpack here. From the Phoebe Buffay-esque lyrics (which is literally just a list of everyday misfortunes) to the random inclusion of bubbles and balloons in what appears to be an empty, not-yet-moved-in mansion, visually speaking, this music video seems to be a disjointed, odd assortment of live action clip-art strung together to give the illusion of a story. But there is no story.

There’s just a random bathtub scene in which the only bubbles present aren’t actually in the bathtub and inexplicably, there are just black plastic balls in there. The video is a bit of a mess, and while it’s understandable that it received 3 million dislikes, what’s odd is that it also received 517,000 likes and nearly 59,000,000 views. Perhaps, at this point it’s so bad, that it’s actually kind of entertaining, like a music video version of the iconically bad film The Room.

If your kids finally got bored of the insanely viral Baby Shark song, then we’re sorry to inflict this earworm on you again. But it’s on this list for a reason because regardless of how popular the song was among children and toddlers alike, the video still garnered over 3 million dislikes.

There’s no way to find out for sure, but we like to think that every single dislike comes from an exasperated parent who just wants to listen to something else for a change. The Baby Shark Dance video in June of 2016 and has received over 3 billion views to date.

It’s not surprising that this music video has so many dislikes. What is surprising though, is that this video was published in 2011 and it is still a top ten ranking video among the most disliked videos on YouTube at this time, in 2019. Do you know what that means? That means the hate that this terrible music video has generated has persisted for nearly a decade.

This song may be lengthy, painfully boring diary entry set to music, but it’s a diary entry with staying power. Make fun of it all you want, it’s not going anywhere.

It’s not the only gaming related YouTube video on this list, but it is the only one to act as a preview for a then-upcoming game. Call of Duty: Infinite Warfare came out in 2016, but the odd thing about this particular video, is that even though it’s received 3.8 million dislikes since its initial posting, many of the most recent comments on this video actually had positive things to say about the game itself.

And some YouTube users have expressed regret for judging the game so harshly, so quickly based on this trailer. This trailer also has almost 43 million views and people are still coming back to it in 2019.

Despacito’s placement on this list is largely due to how over-saturated we were with its presence after it was released. You couldn’t escape the original song or its various remixes. And to be honest when you compare its number of dislikes to its number of likes, the amount of dislikes isn’t really all that bad. Sure, there were 4.1 million dislikes, but there were also a whopping 34 million likes and over 6 billion views.

The song might seem corny now, but numbers don’t lie. Millions of you secretly love this song.

Yes. PewDiePie’s request was fulfilled, and he got the 1 million dislikes he wanted for this video. Plus like 3.2 million more dislikes. And that’s not surprising considering his following (he has over 98 million subscribers on YouTube) and the fact that his supporters seem to be willing to do anything to show support for their favorite YouTube star.

This particular video was published in December of 2016 and has gotten over 17 million views since.

We’re also sorry to have dredged up this particular music video, but with 4.4 million dislikes, Jake Paul’s “It’s Everyday Bro” simply belongs on this list. And if you watch the video, we’re certain you’ll understand why. (But we’re also concerned that it somehow hasn’t received more dislikes and that it has 2.8 million likes.)

It’s the video that launched a million Beliebers. (Yes, that’s what Justin Bieber’s fans actually call themselves.) The video debuted in 2010 and it’s still going strong with over 2 billion views.

The odd thing is, is that usually there’s a wide gap between the number of likes versus dislikes a video receives. And this is usually because many videos eventually reach some sort of consensus (a video is either nearly universally considered bad or it isn’t), but “Baby” is weird because there’s only a million votes that’s separates those who like it and those who don’t. This video might have 11 million likes, but there are still 10 million dislikes. It’s been nine years, and it still looks like we can’t decide if this video is terrible or not.

It actually seems kind of fitting that the website that invented the concept of a YouTube video would have the most disliked video. Like it’s a crazy full circle moment. It is understandable why this video might have so many dislikes. It ticks many of the “terrible video” boxes: It’s corny, there’s too much going on, it’s like a weird patchwork of 2018-specific memes slapped together, the length of the video is entirely too long (eight minutes?!), and there were some cringe-y after-school special moments.

There’s a lot to hate. Does it deserve 16 million dislikes, though? Probably not. But it probably felt good to hit that dislike button.