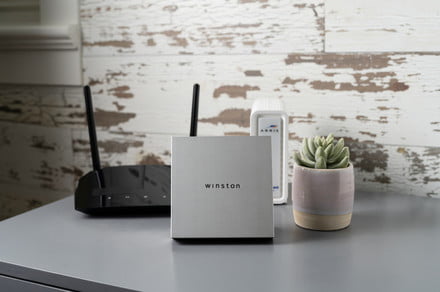 Data is big business and when you venture online it seems like everyone wants a piece of what you’re up to. The trouble is that many of the companies we trust with our private data are proving extremely untrustworthy. From Facebook to AT&T, it’s tough to find a big tech company or service provider that hasn’t been caught selling data or accidentally exposing it. Advertisers go to great lengths to track you online, ostensibly to serve ads more accurately, but that can quickly become more nefarious than it sounds with people being offered different prices or denied insurance based on their online activities. Internet Service Providers (ISPs) can see everything you do and, after overturning net neutrality, they are throttling your speeds for certain sites. All of this comes before we consider the danger of hackers.

What if you could plug in a box and instantly protect yourself and your family from advertisers, big tech companies, ISPs, and criminals? That’s exactly what the Winston Privacy Filter is designed to do.

“Winston is a hardware device you plug into your network and it encrypts your entire internet activity,” Richard Stokes, CEO of Winston, told Digital Trends. “It scrambles it up with all the other Winstons out there, and then it’s putting into play various technology solutions, both at the network and application layer, to disable things like cookie tracking and browser fingerprinting.”

The idea is that you plug your internet connection into this unobtrusive box, plug your router into the other end, and every device on your home network is protected. The Winston Privacy Filter promises a laundry list of features from maintaining privacy to blocking ads and pop-ups, allowing you to use streaming services, and even speeding up your browsing while decreasing data usage. It’s fully configurable and comes with preloaded filters; there’s a boycott Facebook module, for example, which prevents the social media giant from tracking you. It’s also possible to set up exceptions for certain apps or websites, and people can potentially configure and share their own modules.

Because it’s a peer-to-peer solution, your data isn’t being sent to a centralized server, so the folks at Winston can’t see it.

“We want to build a zero-knowledge, distributed platform that doesn’t give us access to any of the data,” explains Stokes. “We don’t send any logging or telemetry data off the devices, everything is encrypted, and it doesn’t go to us it goes to other Winston users.”

The way Winston works is to scramble all the data from its users together and it introduces false device and traffic data to make your actual activities impossible to track. Stokes uses radar obfuscation as an analogy.

“You can’t jam radar, so what they do is throw up a lot of flak and scramble it, mess with the signal,” he explains. “That’s what we do; your real internet traffic is scrambled and sent out through 30 different pipes and in its place is other people’s traffic which is all over the place.”

The end result it is aiming for is that your ISP may still be collecting data, but it’s so noisy now that they’re going to have trouble making any sense of it. Of course, because it’s a peer-to-peer solution, you need a lot of other Winstons up and running for it to work well.

“The more Winstons there are, the faster and more private the network gets,” says Stokes.

We’ve recommended VPNs (Virtual Private Networks) as a good way to protect your privacy in the past, but there are issues with VPNs and you really have to do your homework to choose the right service, because you’re putting a lot of trust in them — everything you do will be routed through their servers. They also have multiple users on individual servers in big data centers, so if streaming services like Netflix see 1,000 people with the same IP address it’s relatively easy for them to figure out what’s going on and block them.

Winston was started at the end of 2017 and has been wildly successful on Kickstarter and Indiegogo. The Chicago-based company has also raised funds privately and it worked with local design agency MNML to create the box. Stokes is a repentant veteran of the ad tech industry and he started Winston as a direct reaction to what he saw there.

“These companies are collecting your data and it’s being bought and sold in a completely unchecked fashion,” he says. “I started Winston to disable as much of that as possible.”

While the idea of Winston is very attractive, it’s an ambitious project that raises a lot of potential issues. The company has started shipping devices, Stokes tells us that 100 just went out. He also freely admits that there have been teething troubles and they’re still working on improving it and ensuring it works with every device in your home. We are planning to test it at Digital Trends soon, so until then we can’t vouch for how well it works, but there’s no doubting Stokes’ passion.

A mobile app is planned for later this year, so you can create an encrypted tunnel to your Winston at home and take advantage of the privacy rules you’ve configured. Stokes says that the blocking of tracking and advertising can also drastically reduce your data usage.

Winston is launching in the U.S. and Canada now and plans to have a network up and running in the U.K. by the end of the year. The Winston box costs $250 and comes with a one-year subscription. Annual subscriptions will cost $100 going forward. You can also still snag early, discounted deals at Indiegogo.