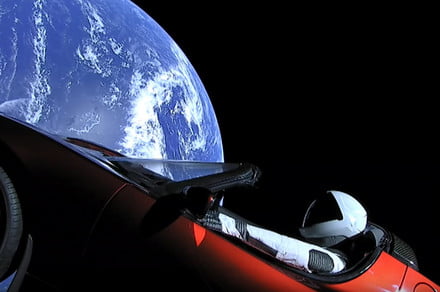 Starman, the mannequin passenger of the Tesla Roadster that SpaceX sent to outer space last year, has completed his first orbit around the Sun and is now preparing for a lonely stretch ahead.

The cherry-red Tesla Roadster was the payload for the test launch of SpaceX’s Falcon Heavy rocket in February 2018. It was Tesla and SpaceX CEO Elon Musk’s personal vehicle and was blasting David Bowie’s 1969 classic Space Oddity as the rocket blasted off.

Musk acknowledged that the cargo was “kinda silly and fun,” but he added that “silly and fun things are important.” By November, Starman had passed the orbit of Mars and was heading out toward the asteroid belt.

According to data from Where is Roadster?, a website tracking Starman’s journey, the electric vehicle has completed its first orbit around the Sun, 557 days after the Falcon Heavy rocket test launch that propelled it into space. Starman has traveled nearly 762.8 million miles since then, which is enough to exceed the car’s 36,000-mile warranty about 21,188 times.

Other interesting information on the website includes the fact that Space Oddity would have played nearly 152,000 times since launch, and that the Tesla Roadster would have traveled far enough to drive all of the roads in the world nearly 34 times over. The car is moving at a breakneck speed of 75,158 miles per hour, so Starman might not be looking too good by now.

The cherry-red Tesla Roadster will fly near Mars, at about 4.6 million miles away, on October 7, 2020, and will give people on Earth the chance to catch a glimpse on November 5, 2020, when the electric vehicle will be just under 32.3 million miles away. After that, Starman will be going through a rough patch of loneliness, as it is estimated that he will not get close to home until 2047.

There is a possibility that NASA will meet Starman in space instead, especially with the planned Mars 2020 mission that will look to collect samples from the Red Planet and bring back them home to be studied. However, it remains to be seen if Starman and his Tesla Roadster will survive long enough in the cruel environment of space.

The Galaxy Tab S7 and Tab S7+ are Samsung's first devices to receive the One UI 3.1 update.What you need
Read more

Galaxy S21 Ultra or iPhone 12 Pro Max? Here’s which one you should buy

From a fun new color to the next generation of 11.6-inch Chromebooks, HP is starting things off with a splash.CES
Read more