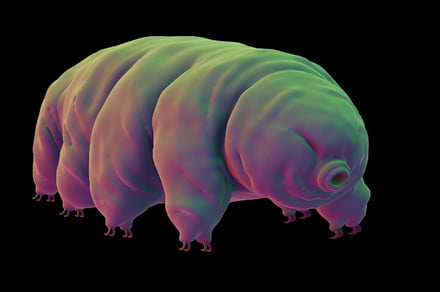 When the SpaceIL craft Beresheet crashed into the moon earlier this year, it left more than just an impact mark. Part of the lander’s payload was a lunar library, about the size of a DVD case, which included an archive of human history consisting of books, photographs, illustrations, and documents, as well as samples of human DNA. And there were some extra passengers along for the ride too — thousands of tardigrades, micro-animals also called water bears.

Tardigrades live in water and are known as Earth’s most durable creatures because they can live in extreme environments, even space, and they can go into hibernation to survive having no access to food or water. Now they may be trying their luck at making a home on the moon.

Nova Spivack, founder of the Arch Mission Foundation which was responsible for the inclusion of the tardigrades in the Beresheet lander’s payload, said that despite the crash, the group believes that the tardigrades made it safely to the moon. “Tardigrades are ideal to include because they are microscopic, multicellular, and one of the most durable forms of life on planet Earth,” he said in an interview with AFP.

Before they were sent on their lunar mission, the tardigrades were dehydrated to put them in a kind of “suspended animation.” They were encased in epoxy to keep them safe, and may theoretically be relivable in the future. As long as they survived the crash, that is. The epoxy should have helped to protect the library when the craft impacted the moon, and it may be lying nearby to the crash site.

So if the tardigrades are still alive then they’re dormant and they won’t be taking over the Moon any time soon. That’s probably for the best, although even if the little creatures did somehow revive, the Moon isn’t subjected to such serious sterilization rules as other locations in the Solar System. As reported by Wired, NASA’s Office of Planetary Protection imposes rules about contamination based on how capable a location is of supporting life. When it comes to Mars, for example, there will be strict rules about what types of life can be introduced to the environment. But on the barren moon, this isn’t such a concern.

Still, now we know there’s a real possibility that there’s life on the moon, in the form of thousands of tiny, robust water bears sleeping in an epoxy case.