See Hayabusa2 touch down on asteroid Ryugu and collect a sample 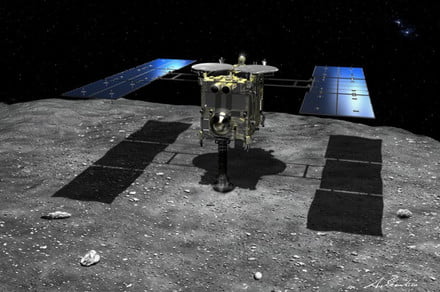 Japanese probe Hayabusa2 has been exploring asteroid Ryugu since it arrived in June 2018 and first touched down in February this year. Now the Japanese Space Agency (JAXA) has shared the above video of the second touchdown the craft made last month.

JAXA shared the video in a tweet, announcing it as 10 times speed animation captured by the CAM-H small monitor camera. CAM-H is an extra camera in addition to the main Optical Navigation Camera (ONC-W1), and it was funded by public donations. The video was created by stringing together a series of still images that were captured at intervals between half a second and five seconds, starting from an altitude of 8.5 meters and finishing at an altitude of 150 meters.

In the video, you can see Hayabusa2 descending toward Ryugu and throwing up dust and small rocks as it intercepts the asteroid. Hayabusa2 then ascends away from the asteroid after it has collected a sample.

In addition to the video, JAXA also shared this annotated image captured by the ONC-W1 and ONC-W2 cameras, which was taken prior to the touchdown. In the image on the left you can see the target marker, labeled TM, which is what Hayabusa2 used to orient itself as it made its touchdown, and the area where the sample was collected using a tool called a sampler horn. In the image on the right, you can see the SCI crater where Hayabusa2 blasted a hole in the asteroid in order to collect a sample of its rock.

The sample collected by Hayabusa2 will be returned to Earth when the craft makes a flyby of Earth in December next year. The sample is valuable not only for its potential contribution to the emerging field of asteroid mining but also because it could reveal information about how the Solar System was formed.

JAXA hopes that Hayabusa2 will have enough fuel left after this fly-by to go on another mission to a different asteroid, 2001 WR1, scheduled for June 2023. It won’t touchdown on that asteroid but it may be able to perform a fly-by and gather scientific information on the asteroid’s composition.