Samsung Galaxy Note 10 Plus vs. Note 10 vs. Note 9: Spec comparison 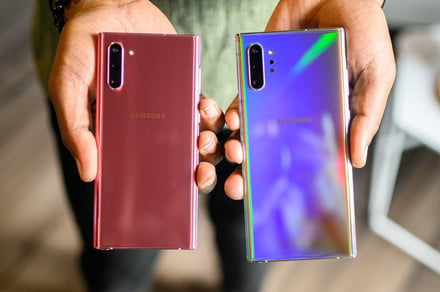 We’re used to an annual upgrade for Samsung’s Galaxy Note line, but at this year’s Galaxy Unpacked event we got not one new Note, but two. The Samsung Galaxy Note 10 Plus and the Galaxy Note 10 deliver a lot of what we were hoping for and a few more things besides, but there are some differences between the two that are worth noting. There are also some interesting changes from last year’s Galaxy Note 9.

Let’s compare Samsung’s three latest Note models to dig into exactly what divides them and pick a winner across various categories to help you decide whether it’s time for an upgrade and guide you to the right purchase.

We can immediately eliminate the Galaxy Note 9 here because it has last year’s processor, the Qualcomm Snapdragon 845. The Galaxy Note 10 Plus and the Note 10 will be packing the newer Qualcomm Snapdragon 855 in most markets, but may have a comparable Samsung processor in some places. Samsung says the new phones are 33% faster for general processing and 42% faster for graphics. While the Note 9 was offered with 6GB or 8GB of RAM, the Note 10 comes with 8GB of RAM and the Note 10 Plus comes with a whopping 12GB of RAM. That’s more than enough to satisfy major multitaskers. The performance of the Note 10 and Note 10 Plus will also benefit from the adoption of UFS 3.0 storage and support for Wi-Fi 6.

The Galaxy Note 10 has a significantly smaller battery than the Note 9, but it also has a slightly smaller screen and a more power-efficient processor, so that may not result in much of a difference in real-world stamina. The Note 10 Plus has the biggest battery, but also the largest screen to power. We expect the new Notes will offer at least the same battery life as the Note 9, so they should see you through even the busiest of days. The big improvement in the battery department is in charging speeds. You’ll get a charger in the box with the Note 10 and Note 10 Plus that goes up to 25W — the Note 9 maxed out at 18W. That means charging times should drop to around the hour mark. The Note 10 Plus also has the option of super-fast charging at 45W, but you’ll have to buy a capable charger separately.

The Samsung Galaxy Note 10 is a lot smaller than the Note 9, despite almost having the same size screen. Samsung has managed to pack a much bigger screen into the Note 10 Plus without increasing its frame by much and both the new phones are significantly slimmer than their predecessor; they are also lighter, which is a particularly impressive achievement in the Note 10 Plus. The edge-to-edge design with hole-punch, front-facing cameras is familiar from the S10 range, as is the curved glass front and back which slides neatly into the metal frame, but the Note 10’s sport a vertically stacked camera suite offset to the left on the back and a central hole-punch camera in the screen.

The S Pen and the USB-C charging port are there on all three, but Samsung has ditched the 3.5mm audio port in the Note 10s. The fingerprint sensor on the back of the Note 9 is also gone, with the Note 10s switching to an ultrasonic in-display fingerprint scanner.

You’ll need a case to protect these phones, as the fragile curved glass is easy to crack or scratch if you drop them, and the metal frame can get scuffed. They all offer water resistance, so rain or spills shouldn’t be a cause for concern. All three have an IP68 rating.

Apart from the loss of the headphone port, we prefer the design of the Note 10 and Note 10 Plus. Which is best depends on the size you want — the Note 10 Plus will be too big for some people.

The race to turn out the best camera phones has made this one of the categories where you notice the most difference from model to model and the Notes are no exception. The Note 9’s dual 12-megapixel lenses and 8-megapixel front-facing camera look positively anemic next to the triple-lens camera in the Note 10, which combines a 16-megapixel ultra-wide-angle lens, with a 12-megapixel variable aperture lens, and a 12-megapixel telephoto lens. The Note 10 Plus goes even further, adding a Time-of-Flight VGA DepthVision camera to the Note 10’s triple-lens setup. The Note 10s both have 10-megapixel front-facing cameras and some impressive video capture options that are absent from the Note 9.

The Note 10 Plus wins out here with the most versatile camera suite, but the Note 10 isn’t far behind.

You’ll find Android 9.0 Pie with Samsung’s One user interface over the top on all three phones. It’s some of the most feature-packed software around with lots of customization options, but it manages not to be overly complex. Sadly, Samsung’s update record is poor as it tends to take a while to roll out Android updates, but that’s going to be the same with each of these phones. The Note 10 and Note 10 Plus will likely be supported for a little longer than the Note 9 just because they’re newer, but there isn’t much to separate them here.

Samsung is the king of special features in its smartphones, so you’ll find the S Pen stylus, Bixby, DeX desktop mode, and lots more in all three of these phones. The Note 10 and Note 10 Plus seem to have a few new S Pen tricks and extended DeX support, enabling them to convert handwriting and export to Microsoft Word or double up as desktop replacements. They also boast wireless power-sharing, so you can use them to wirelessly charge other Qi devices.

The Samsung Galaxy Note 10 Plus is the only one to offer super-fast charging at 45W and the DepthVision camera enables it to scan an object and turn it into a movable 3D rendering. The Note 10 Plus also comes in a 5G variant for those of you looking to take advantage of next-generation mobile networks.

The name gives it away, but the Samsung Galaxy Note 10 Plus does offer just that little bit more than the Note 10 or last year’s Note 9. A much larger and sharper screen, a Time-of-Flight sensor in the camera, a bigger battery, and a faster charging option set it apart from the regular Note 10. Both Note 10 models offer better performance, more versatile cameras, and more extras when compared to the Note 9, though there’s nothing revolutionary to demand that you update now if you already own a Note 9. The superiority of the Note 10 Plus is reflected in the price, but if budget is no obstacle, it’s the phone we would pick.

Save $150 on the Microsoft Surface Pro X, because back-to-school

It's down to $850 from the original price of $1,000, which is a huge discount on the Microsoft Surface Pro X
Read more
News

Everything you need to know about the Galaxy Watch 3!

Samsung's latest wearable does it all.While Google fumbles around with Wear OS and struggles to do anything interesting with it,
Read more

How to watch MLB: Atlanta Braves vs. Philadelphia Phillies online

The four-game series between the Braves and the Phillies starts tonight. Here's how to stream it live online.
Read more

The three-game series between the Cubs and the Cardinals starts tonight. Here's how to stream it live online.
Read more

Bluetooth speakers: How to find the best one