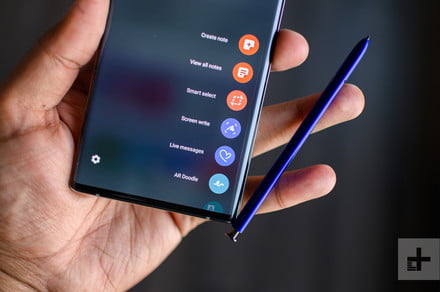 There’s a new Galaxy Note range in town, and Samsung’s super-sized flagship is coming in two models for the first time — the Samsung Galaxy Note 10 and the Note 10 Plus. The Note 10 Plus is the larger of the range, and it’s packed to the brim with the latest hardware, a newly redesigned S Pen, and an almost completely bezel-less hole-punch display.

Although the Note 10 Plus is joined by a smaller Note 10, we’re ranging outside of Samsung’s stable in this particular matchup. Samsung may be prolific, but the match we all want to see puts the new Note against a stalwart foe: The iPhone XS Max. This large-screened beauty is one of Apple’s finest, and it’s eager to get to grips with the latest and most powerful Note flagship. Is the Galaxy Note 10 Plus the right new phone for you, or should you be putting aside all your dollars for the iPhone XS Max? We found out.

The Note 10 Plus uses the flagchip of the year — the Snapdragon 855. It’s a very fast processor, and it’ll perform extremely well for gaming and apps alike. But the iPhone XS Max is no sluggard with Apple’s A12 Bionic processor to provide supremely snappy performance and super-smooth gameplay. This is likely to be close.

What of battery life? The Note 10 Plus has the larger battery, sporting a 4,300mAh capacity compared to the XS Max’s 3,174mAh. We haven’t had much time with the Note 10 Plus’s battery yet, but based on the S10 Plus’s performance, we’re expecting a day’s use with some spare — though the larger screen and resolution may mean a lower result. We’ll have to test it to be sure. The XS Max also managed a day’s use on a single charge.

Speaking of charging, both phones come with strong fast charging capabilities. The Note 10 Plus caps out at a super-fast 45W rate, while the XS Max maxes at 30W. The Note 10 Plus comes with a 25W charger that Samsung claims charges from empty to 100% in under an hour. That’s much better than the XS Max, which … er, doesn’t come with a fast charger at all. Both also have wireless charging.

We’re loathe to award this category based purely on charging speed, so we’ll need to wait and see how the Note 10 Plus’s performance and battery life stack up against the iPhone in the real world.

Beauty is in the eye of the beholder, but we doubt many would deny that both these phones are beautiful. The iPhone is nothing if not iconic, and the notched edge-to-edge display and gold-effect glass body are stunning. The Note 10 is similarly beautiful, but for very different reasons. There’s no notch here — just a centrally placed punch-hole display — and the display stretches over the entire front of the phone. It’s almost completely bezel-less and it’s jaw-dropping.

So they’re both good looking, but are they durable? Glass is always going to be fragile, and you’ll want a case for both. Thankfully there’s strong water-resistance here. Both phones sport a solid IP68 water-resistance that mean they can both survive a drop in the pool.

These two are both beautiful for very different reasons, and they’re pretty even on the durability front too. We can’t pick between them.

As befits their names, both of these phones have large screens. The iPhone XS Max has a 6.5-inch Super AMOLED display with a resolution of 2688 x 1242 pixels. It’s bright, vivid, and beautiful. But the enormous 6.8-inch Dynamic AMOLED display on the Note 10 Plus is one of the best displays around. It boasts a maximum resolution of 3040 x 1440 so it’s super-sharp, and it’s flawless.

Finally, we have our first clear winner; iPhones have always had excellent displays, but Samsung’s current panels are the cream of the crop.

But it’s up against some seriously impressive camera tech, as the Note 10 Plus has pushed the envelope even further with a quad-lens system. It’s comprised of a primary 12-megapixel lens comes with variable aperture (so it swaps between f/1.5 and f/2.4),  an ultra-wide-angle 16-megapixel lens with an aperture of f/2.2, a 12-megapixel telephoto lens with an aperture of f/2.1, and a fourth DepthVision lens that’s used to capture depth data for more accurate portrait shots. There’s also a 10-megapixel selfie camera around the front, and it supports Samsung’s night mode for low-light selfies.

Thanks to years of improvements, it’s been a long time since Samsung’s interface was a serious downside of its phones. The Note 10 Plus runs Android 9.0 Pie with Samsung’s One UI interface laid over the top. It’s smooth and intuitive, and it has some great gesture controls too. But iOS 12 on the iPhone XS Max is just as good, with snappy performance, a huge app store, and some excellent new additions. It’s a close match between the two in software, and your choice will likely be personal.

But look at updates and it’s anything but personal. Apple is the benchmark for snappy and long-lasting software support, and regularly updates 3-year-old devices with the latest OS updates days after they’re released. By contrast, Samsung often takes upwards of six months to update its latest flagships, and phones over 2 years old rarely see the latest Android updates. Apple’s update game is extremely strong, and it wins this round.

As flagship phones, you’re not lacking special features in either of these phones. The iPhone XS Max is equipped with Apple’s latest technology, including Face ID facial recognition, AR-powered Memojis, Siri Shortcuts, and more. The Note 10 Plus benefits from Samsung’s legacy of special features, including Bixby, VR support, and features from the S10 range, such as the in-display fingerprint scanner and Wireless PowerShare.

But it’s the S Pen that gives the Note the advantage. It’s been redesigned with beveled edges for more comfort, and comes with a host of new features. You can use it to draw on people’s faces in AR, use Air Actions to control the screen (like swiping left and right to swap camera modes or drawing circles to zoom), and you can convert handwritten notes into text by using Microsoft Word. It’s also got an improved Dex desktop mode that can be activated by plugging it into a laptop’s USB port.

After a hard-fought battle, it’s the Samsung Galaxy Note 10 Plus that gets the win. That’s in large part down to Samsung’s incredible screen technology, the versatile camera suite, and the glut of special features — including the S Pen. But it’s a close match, and the iPhone is not far behind. Pick the iPhone XS Max and it won’t let you down in camera or screen quality, and there are plenty of features to boot. The XS Max’s raw power seals the deal, and should mean Apple fanatics won’t feel short-changed. But in terms of answering which phone gives you better bang for your buck, it has to be the Samsung Galaxy Note 10 Plus.