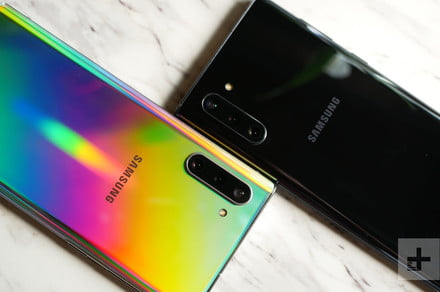 As 5G networks continue to roll out and spread, you may be hunting for a smartphone that’s capable of taking advantage. If you’ve decided you’re ready to snag a 5G phone, then you owe it to yourself to check out Samsung’s two supersized options: The Samsung Galaxy Note 10 Plus 5G and the Samsung Galaxy S10 5G.

While the S10 5G is the biggest and most expensive of the S10 lineup, it’s also significantly different from its siblings, whereas the Note 10 Plus 5G is identical to the Note 10 Plus except for the 5G support. At first glance the Note 10 Plus 5G and the S10 5G have a lot in common, so choosing between these two smartphones is going be tough, but this comparison will help, as we’re about to explain precisely how they differ.

It’s no surprise to find Qualcomm’s Snapdragon 855 processor inside both of these phones and it ensures fast performance. The Note 10 Plus 5G has an edge with 12GB of RAM, while the S10 5G comes with 8GB of RAM. Realistically, only serious multitaskers will feel the benefit of the extra RAM here. Both come with 256GB or 512GB of storage, but only the Note 10 Plus 5G has a MicroSD card slot for expansion.

The S10 5G has a bigger battery rated at 4,500mAh and with a slightly smaller screen we’d expect it to outlast the Note 10 Plus 5G. But the Note 10 Plus 5G does an advantage in the charging department — while both have 25W chargers in the box, the Note supports up to 45W charging, though you will have to buy a special charger separately. Both phones support fast wireless charging at 15W.

There are clear similarities between these phones, with both sporting gorgeous curved screens and curved glass backs that melt into metal frames. They also both have fingerprint sensors in the display. The most immediately obvious difference is the camera suite on the back, which is horizontally stacked in the S10 5G, but vertically stacked and offset to the left in the Note. The S10 5G has a Bixby button and a 3.5mm headphone port, while the Note ditches both. Around front, the S10 5G has a dual-lens, hole-punch camera at the top right, whereas the Note goes with a single, central lens. The Note also has a pop out S Pen stylus. There are differences in the available colors, too, with the Aura Glow Note sure to draw lots of admiring glances.

We prefer the more rounded corners on the S10 5G, but Samsung has managed to pack a slightly bigger screen into the Note without expanding its footprint and they weigh the same. It’s tough to choose here. No one is likely to miss the Bixby button, but some people will be tempted to opt for the S10 5G simply for the headphone port. On the other hand, some people will want the S Pen that only comes with the Note.

The Note boasts a 6.8-inch screen while the S10 has a 6.7-inch screen. Both are Dynamic AMOLED with the same resolution and both are HDR10+ certified. These are two of the best and brightest screens you’ll find in a phone today. The Note is going to edge it here because of the slightly bigger screen, but also because it only has a single hole-punch camera lens in the center, whereas the S10 loses a little more screen real estate with its dual-lens front-facing camera.

With incredible quad-lens setups the S10 5G and the Note 10 Plus 5G truly have some of the most versatile cameras around. Both include a 12-megapixel main lens with a variable f/1.5 to f/2.4 aperture and optical image stabilization, a 12-megapixel telephoto lens (also with OIS), and a 16-megapixel ultra-wide-angle lens with an f/2.2 aperture, along with a Time-of-Flight sensor which is capable of capturing accurate depth information. The aperture size of the telephoto lens in the Note is slightly bigger, it has gone from f/2.4 in the S10 to f/2.1 in the Note, which should allow for slightly better low-light performance, though we’re not expecting to see a big difference.

Around front the S10 pulls ahead with a dual-lens setup that combines a 10-megapixel lens with an f/1.9 aperture and a second Time-of-Flight sensor. The Note just has a single 10-megapixel lens around front and it has a smaller f/2.2 aperture which means it won’t deal with low light situations as well. If you’re a big selfie fan, the S10 5G is the phone to pick.

With Android 9.0 Pie and Samsung’s excellent One user interface on top, you’re going to have much the same software experience whichever of these phones you choose. The Note has a few extras related to the S Pen, but you aren’t going to miss them if you’re not a stylus user. Samsung is not the fastest to update Android versions, but we imagine you’ll be on a similar schedule with either of these phones, so there’s nothing to divide them here.

Samsung adds a lot of value with special features, but both these supersized smartphones boast a similar lineup. From Bixby to augmented reality to video features like Live Focus, which blurs the background in real time, you’ll find lots of options to try out. While most will be the same on both phones, only the Note has an S Pen, which enables note taking and sketching, but also fun features like AR doodle, which allows you to draw in 3D or draw on your friend’s faces. The DeX mode, which lets you plug your phone into a monitor so it can double up as a desktop substitute, works with both phones. Samsung did announce some new Microsoft integrations at the Note launch, that let you do things like mirror your phone screen on your PC or laptop, but we assume they’ll make it to the S10 5G too. The S Pen scores the win for the Note.

The Samsung Galaxy S10 5G starts at $1,300 and you can buy it at Verizon, T-Mobile, and Sprint. It is also available on AT&T, but only for business customers. The Samsung Galaxy Note 10 Plus 5G also starts from $1,300 and, like the S10 5G, it’s coming to Verizon first, but we expect it to land on other carriers soon. It’s worth noting that both of these phones will likely only work with 5G on the carrier’s network you buy through, because their 5G networks rely on different technologies.

This is an extremely tough choice, because there isn’t a huge amount to divide these phones. The S10 5G has the headphone port, the superior front-facing camera, and the slightly more rounded design. The Note 10 Plus 5G has the S Pen, more RAM, faster charging, slightly more screen, and room for a MicroSD card. We’re giving the Note 10 Plus 5G the nod here, but by a very slim margin. You should obviously pick based on what’s most important to you, because these are both great smartphones.