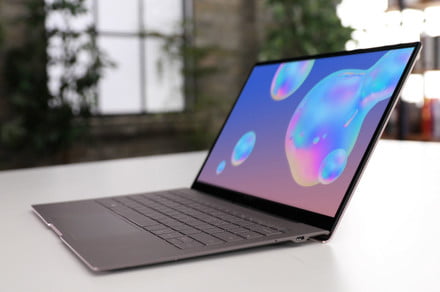 Apple’s MacBook Air is the go-to lightweight laptop for legions of people around the world. But now there’s a new challenger in the form of the Samsung Galaxy Book S, which has swaggered onto the stage with a whole host of eye-catching claims.

Can it beat the Air? We haven’t fully tested the laptop yet, but let’s take a first look at how these two machines compare.

Samsung scores a win with its keyboard — although that’s not difficult given the ongoing fiasco that is Apple’s butterfly keyboard. In our hands-on review, we noted the keys on Samsung’s laptop are nice and clicky, although perhaps a little too loud. But when you consider Apple’s butterfly keyboard is so bad people are suing the company — well, a little noise doesn’t seem so bad, does it?

However, Apple strikes back with its port offering. While both the Galaxy Book S and the Air have two USB-C ports, the Air’s are supercharged with Thunderbolt 3 goodness, making them by far the faster of the two.

We also have to give the points to Apple for the Air’s build quality. It both looks and feels like a truly premium laptop that’s built to last. While the Galaxy Book S certainly looks lovely and sleek, it feels a tad flimsy; we could hear clicking when we held the edges, for example.

We’re reserving judgement on Samsung’s trackpad until we’ve had more time to test it, but it’ll be hard pressed to beat the one you’ll find on the MacBook Air. Apple makes the best trackpads in the biz, and paired with MacOS’s extensive gesture support, it really is the one to beat.

The Galaxy Book S comes with Qualcomm’s eight-core Snapdragon 8cx processor. It looks like a very capable competitor to Intel’s Core i5, but bare in mind Intel’s Ice Lake chips are just around the corner.

We don’t yet know much about the graphics capability of the Snapdragon processor. Qualcomm says the 8cx’s Adreno 680 GPU is the fastest graphics chip it’s ever made, with up to twice the performance of the Snapdragon 850. We’ll report back when we’ve had a chance to fully test the Galaxy Book S.

What we do know is that you’ll get a 256GB SSD and LTE connectivity — perfect if you need to work pretty much anywhere.

Things are much clearer when it comes to the MacBook Air. This comes with an Intel Core i5-8210Y that blitzes through single-core tasks, handily beating rivals like the Dell XPS 13 and HP Envy x2.

In multi-core tests, though, the Air’s dual-core chip can’t keep up. The XPS races ahead here, as does the Huawei MateBook X Pro — both nearly doubled the Air’s score in our Geekbench test.

Apple offers two configurations of the Air, both with a 1.6GHz dual-core 8th-generation Intel Core i5 processor with Turbo Boost up to 3.6GHz, 8GB of memory and Intel UHD Graphics 617. The only real difference is that the base model has a 128GB SSD, while the upgraded version has a 256GB SSD.

It’s clear Samsung is going all-out for lightness here. The Galaxy Book S weighs a mere 2.1 pounds — noticeably lighter than the 2.75 pounds MacBook Air. It’s achieved this while achieving a remarkably similar footprint to the Air: 30.52 x 20.32cm to the MacBook’s 30.41 x 21.24cm.

Samsung is also pulling out all the stops when it comes to battery life. The company claims an eye-popping 23 hours for the Galaxy Book S — but there’s a catch. Samsung achieved this number by disabling both Wi-Fi and LTE, which make quite a dent in your battery life. So it’s not exactly a real-world test, then. Even so, the battery in Samsung’s portable is likely to be miles ahead of the Air — we’ll have a clearer picture once we’ve been able to test it.

How does the MacBook Air do? Well, we were pretty disappointed by its battery life. Apple rates it for up to 13 hours of iTunes movie playback and up to 12 hours of wireless web browsing. But in our testing, we only managed to get eight hours of web browsing and 10 hours of video playback. That makes it fairly average for a laptop.

Apple recently dropped the price of the Air, meaning you can pick one up for $1,099. In return you get a laptop that’s both portable and incredibly well-build, with an excellent trackpad and Apple’s solid software.

But is it enough to beat the Galaxy Book S?

We won’t know for sure until we get our hands on it for a full review, but the Galaxy Book S is lighter, has a much better keyboard, and comes in at $100 cheaper, too. Even if its battery life doesn’t match the claimed 23 hours, you can still expect it to clock in far ahead of the Air. It’s also got LTE support and a touchscreen, if that’s your jam.

Of course, we can’t yet say much about the Galaxy’s performance (aside from the promising hints we’ve been getting about the Snapdragon 8cx), but even without that, the Air has some serious competition on its hands.