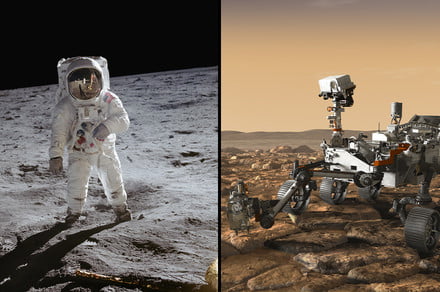 From left to right: Apollo 11 astronaut Buzz Aldrin stands on the Moon; 47 pounds (21.5 kilograms) of samples were brought back to Earth from that mission; the Mars 2020 rover, seen here in an artist’s concept rover, will be taking the first planetary samples at Jezero Crater, Mars (on right). NASA/JPL-Caltech

One of the biggest scientific successes of the Apollo mission was collecting samples from the Moon which were brought back to Earth for study. Even 50 years later, these samples are still leading to new scientific breakthroughs. And NASA hopes to replicate this success with its Mars 2020 mission, which aims to collect samples from Mars when it launches next year.

The challenge is how to get those samples back to Earth. If the mission is successful, this would be the first time that a sample has been collected from another planet. “Apollo 11 demonstrated the immense value of returning samples from other worlds for analysis here on Earth,” Thomas Zurbuchen, NASA’s associate administrator for the Science Mission Directorate, said in a statement. “Today, we are standing on the shoulders of Apollo, preparing for the launch of the initial step in humanity’s first roundtrip and sample return from another planet — Mars.”

NASA has revealed more details about its sample collection plans, focused around the Jezero Crater where the Mars 2020 rover will land. The rover will collect the samples and can perform basic analysis in situ, then two subsequent missions will be required to bring those samples back to Earth. The first of these missions would be landing a rocket called the mars Ascent Vehicle along with a spacecraft and second rover in the crater, then launching the samples into orbit around Mars. The second mission would rendezvous with the samples and return them to Earth.

To achieve this monumental feat, NASA will cooperate with other space agencies such as the European Space Agency. The mission ties into NASA’s broader mission for eventual manned missions to Mars staged from an outpost on the Moon as part of the Artemis project.

Hurry! This Canon color printer is $120 off at Walmart today

If you want to enjoy the benefits of a printer, take a look at Walmart's offer for this Canon color printer that takes $120 off its price, lowering it to $199.
Read more

Samsung's other 2020 flagships are also expected to start receiving the latest security patch soon.What you need to knowSamsung has
Read more

The latest iteration of the Turtle Beach Stealth 700 makes a great headset even better.Few gaming brands are as synonymous
Read more