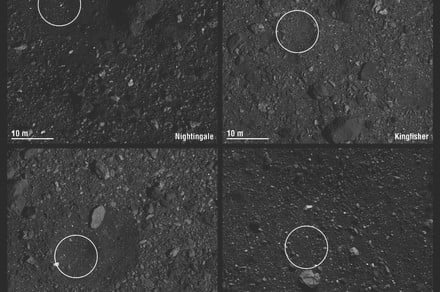 Last year, the OSIRIS-REx craft arrived at asteroid Bennu and imaged it, beginning the process of selecting a site from which to collect a sample from the asteroid to be brought back to Earth. Now, the NASA team has selected four potential sites to choose from for the sampling mission.

Initially, the team had planned to have two final sites chosen by now. But when the craft arrived at the asteroid, it turned out to have a much rockier surface than the engineers had expected, necessitating the team take a closer look at their options.

“We knew that Bennu would surprise us, so we came prepared for whatever we might find,” Dante Lauretta, OSIRIS-REx principal investigator at the University of Arizona, Tucson, said in a statement. “As with any mission of exploration, dealing with the unknown requires flexibility, resources, and ingenuity. The OSIRIS-REx team has demonstrated these essential traits for overcoming the unexpected throughout the Bennu encounter.”

The four sites that have been selected are named Nightingale, Kingfisher, Osprey, and Sandpiper, which are Egyptian native birds to complement the craft’s namesake god of the underworld. Each of the sites is different in terms of location and geological features, but they could all be potential landing sites from which a sample could be collected.

To choose which site will be used for the sampling, the team will perform further reconnaissance passes with the craft to take higher resolutions images to identify surface features. This will happen later this year and hopefully will identify landmarks that can be used by the autonomous landing navigation system.

The team is confident that they can find an appropriate landing location, even given the challenges that the asteroid has presented. “Although OSIRIS-REx was designed to collect a sample from an asteroid with a beach-like area, the extraordinary in-flight performance to date demonstrates that we will be able to meet the challenge that the rugged surface of Bennu presents,” Rich Burns, OSIRIS-REx project manager at NASA’s Goddard Space Flight Center, said in the same statement. “That extraordinary performance encompasses not only the spacecraft and instruments, but also the team who continues to meet every challenge that Bennu throws at us.”