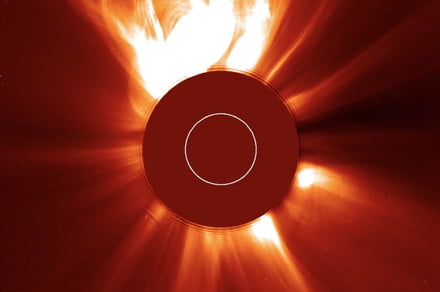 NASA has selected two proposals to demonstrate technologies to improve science observations in deep space. The proposals could help NASA develop better models to predict space weather events that can affect astronauts and spacecraft, such as coronal mass ejections (CMEs). In this image, taken by the Solar and Heliospheric Observatory on Feb. 27, 2000, a CME is seen erupting from the Sun, which is hidden by the disk in the middle, so the fainter material around it can be seen. ESA/NASA/SOHO

Small satellites can be used for anything from collecting images and videos of Earth to exploring the Solar System, and as the technology improves, more and more uses will become possible. NASA has been searching for ideas to push ahead the capabilities of the hardware, and the agency has just announced two new projects to demonstrate the potential of small satellites.

The projects could help to predict space weather events, NASA says, as part of the agency’s heliophysics program, which “seeks to better understand the nature of space throughout the solar system and how it changes in response to the constant outpouring of energy and particles from the Sun and how it interacts with planetary atmospheres.”

The first project is the Science-Enabling Technologies for Heliophysics (SETH) proposal, which will demonstrate two new ideas. The first is improving data communications between satellite constellations using optical communications technology. The second is detecting particles and waves which are given off by the Sun, particularly energetic neutral atoms that do not have a charge. This could be useful for detecting and predicting space radiation which can be harmful to astronauts and equipment.

The second project is the Solar Cruiser, using an 18,000 square foot solar sail to travel close to the Sun and measure its magnetic field. Energetic explosions called coronal mass ejections send solar material flying away from the Sun’s surface and into space, and can even affect technology here on Earth. The project aims to improve predictions of these ejections to protect infrastructure on Earth.

The fact the satellites are small makes the projects more affordable, NASA explains. “By focusing on SmallSats and capitalizing on the cost savings of sharing a launch, we can test and advance cutting-edge technologies at a reasonable price,” Thomas Zurbuchen, associate administrator for NASA’s Science Mission Directorate, said in a statement. “We are leading the charge in using this innovative solution to test new mission paradigms and technologies and, in turn, to reap great rewards researching our neighborhood in space.”