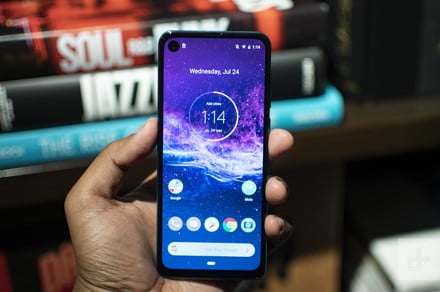 Vertical videos suck. They’ve plagued the internet ever since the rise of smartphones. People shoot them because it’s easier to film one-handed when holding the phone in portrait orientation. Around 70 percent of consumers film videos vertically, according to Motorola. The company’s latest phone has a solution.

The Motorola One Action (249 euros, U.S. pricing is not yet announced) has a dedicated video action camera. It’s oriented so that when you film vertically, your footage will play back horizontally. It’s a feature I didn’t know I wanted until I tried it out.

The end of vertical videos?

The Motorola One Action has three cameras on the back: a 12-megapixel main sensor with an f/1.8 aperture, a 5-megapixel depth sensor for portrait mode photos, and a 16-megapixel wide-angle action camera with an f/2.2 aperture and a 117-degree field of view.

The first two lens are standard for a phone priced at 249 euros (~$278), but the latter lens makes it stand out. It’s a wide-angle lens, so you get can get a whole lot more in a shot. It also uses pixel-binning technology, so it combines pixels to take in more light. The result is a 4-megapixel photo, but one that performs better in low-light.

And then there’s the action camera. It’s placed horizontally in the module, so when you film vertically, the footage is still captured in landscape orientation.

You can watch a 21:9 movie on the phone without black bars flanking the content.

It works well, though it’s worth noting that when you film vertically, the live preview of the video is small. It’s an intuitive fix for the plague of vertical videos, and I wish more phones had a feature like this. The action camera can film at a 21:9 cinematic aspect ratio and supports electronic image stabilization. You can shoot up to Ultra HD at 30 frames per second (with the main lens).

Motorola’s Hyperlapse mode is available on the action camera, so you don’t need to awkwardly hold your phone in landscape. The Motorola One Action does make video capture much, much simpler for the average smartphone owner.

What if you want to film vertically for your Instagram Stories? No problem. You can switch to using the main camera instead of the action camera. If you want to use the wide-angle lens for vertical video, though, you’ll have to hold the phone horizontally.

I’ve not reached a verdict on the main camera and depth sensor, but I expect strong photos in good lighting conditions, and mixed to poor results in low light. That’s standard for cameras on phones in this price bracket, like the Nokia 7.1.

I still think the 21:9 aspect ratio will be popular.

The usual Motorola camera extras are here, like Spot Color, which isolates a color and makes everything black and white in a photo, Cinemagraphs, and more. You can even adjust the blur intensity in portrait mode photos after you’ve captured them.

I’ll be putting the camera to the test when I get my hands on the phone for the full review, but I couldn’t be more excited to use the special action camera. I suspect it’ll change how I use the camera day-to-day.

Motorola and Sony are leaders in 21:9 phones, and I’m all for it. This aspect ratio translates to a narrow, tall screen, instead of the wide and short screen on 16:9 phones (like the Samsung Galaxy S7). Most phones now have 18:9 or 19:9 aspect ratios, placing them between the two.

What’s so special about 21:9? Movies are typically filmed in this aspect ratio. Motorola calls it a CinemaVision screen. You can watch a 21:9 movie on the phone without black bars flanking the content. Sony also has a 21:9 screen on its 2019 phones, including the Xperia 1 and Xperia 10 Plus.

However, most of the video you’ll watch isn’t in 21:9. YouTube videos, for example, are filmed in 16:9, and they look a bit squished on the Motorola One. Yes, you can find 21:9 movies on Netflix (and YouTube), but they’re uncommon.

Still, I think 21:9 phones will become popular because they feel great to hold and use. The Motorola One Action is so narrow — almost like a remote control — that I can easily wrap my palm around it. It is tall, though, so I have to shift the phone slightly to reach the top.

If you play many games, or use your phone constantly, the Exynos chip may feel weak.

The One Action’s 6.3-inch screen is surrounded by a uniform bezel, mimicking Samsung’s Galaxy S10e and the iPhone XR. It looks contemporary thanks to its nearly bezel-less design, and I think the 12-megapixel selfie camera’s placement is attractive.

The screen is the same as you’ll find on the Motorola One Vision, which launched earlier this year in markets outside the U.S. It’s an LCD IPS with 2,520 x 1,080 resolution (432 pixels-per-inch). It looks sharp and colorful, though brightness could be better.

Motorola’s choice of materials doesn’t offer the premium feel I prefer, but the design makes up for that. The rear is clean and simple, especially in the two colors coming to the U.S: denim blue and pearl white. I tried an Aqua Teal model, which Motorola hasn’t promised for the U.S. I’d pass on it – I’m just not a fan of the color.

The Motorola dimple on the back doubles as a fingerprint sensor. A single, bottom-firing speaker lines the bottom, next to the USB-C charging port. The body of the phone is rated at IPX2 water resistance, which means it can withstand the rain, but that’s about it.

The Motorola One Action has Samsung’s Exynos 9609 processor with 4GB RAM — the same as the One Vision. In our review, performance was adequate for basic tasks like browsing social media, checking emails, and messaging. Apps could load more quickly but aren’t annoyingly sluggish. However, the demo phone I tried had few apps installed.

A big disappointment hangs over the Motorola One Action. The U.S. model isn’t part of the Android One program.

If you play many games, or use your phone constantly, the Exynos chip may feel weak. I’ll need to test it further to know for sure. Few U.S. phones have the Exynos processors, but I enjoyed Samsung’s Galaxy A50, which has the slightly faster Exynos 9610.

There’s 128GB of internal storage, a generous amount for a phone at this price, and a MicroSD card slot is in tow if you need more space. The Motorola One Action packs a 3,500mAh battery, which should be more than enough to make the phone last a full day of use.

No Android One for the U.S.

A big disappointment hangs over the Motorola One Action. The U.S. model isn’t part of the Android One program. Android One is a Google initiative that ensures a clean, bloatware-free Android experience promising three years of monthly security updates and two years of operating system upgrades. The global model is part of the program, but the U.S. model isn’t. Motorola says it dropped Android One support in the U.S. because it’s not a “primary purchase driver.”

Whatever the reason, I think it’s a mistake. Updates keeps a phone secure and bug-free, while also adding new features when the latest version of Android is released. Motorola only promises “industry-relevant security updates,” which means an update whenever there is a serious malware threat, and one OS upgrade. You’ll get Android Q (coming in August) but that’s it.

HMD Global, which makes Nokia phones, have several Android One phones in the U.S. that deliver consistent updates, including the Nokia 7.1 and Nokia 9 PureView. Its carrier-only phones like the Nokia 2V and Nokia 3.1 Plus aren’t in the program, but HMD says it’s working with carriers to issue updates. The Motorola One Action isn’t yet tied to a carrier, and it will be available as an unlocked phone, so Motorola should do more to handle updates.

The Motorola One Action is 249 euros, which translates to around $278. It’s available now in international markets, but U.S. pricing hasn’t been announced. It will arrive stateside in the fall.

The One Action is promising with its unique camera and low price, but faces stiff competition from the Samsung Galaxy A50, Motorola’s own Moto G7, and the Moto G7 Power – all of which have faster hardware. I’ll be putting it through its paces to see if the action camera and 21:9 screen save the day.