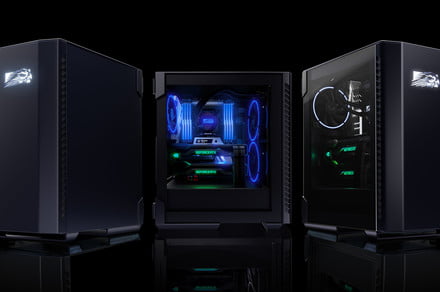 Falcon Northwest’s 20th Anniversary Edition Talon can be configured for work or play, with aesthetic options to match.

Boutique gaming house Falcon Northwest is celebrating the 20th anniversary of its Talon desktop, bringing modern features to the midsized gaming tower. Though the Talon still maintains its premium metal enclosure, Falcon Northwest finally added options for glass doors that provide tool-less access via a magnetic closing system for easy upgrades and repairs. This makes the Talon 20th Anniversary Edition more competitive with rival high-end gaming systems, like Origin PC’s Neuron, which boasts similar design features, and the glass panels give Falcon Northwest the opportunity to finally add RGB lighting for gamers who want a bit more flair in their desktop designs. And with a see-through design, Falcon Northwest is keeping the inside clean and tidy with sleek CableMod sleeved cables.

The Talon 20th Anniversary design was a result of two years of work, Falcon Northwest claimed, and the modernized design allows Falcon to showcase more of the premium technology inside. The Talon is a built-to-order custom gaming PC that supports high-end silicon, like Intel’s Core i9 processor and Nvidia’s GeForce RTX and Quadro graphics. The system can be equipped with an Asetek fully-sealed liquid cooling system and large 280mm radiator. Though these components make this desktop a great fit for gamers, creatives will find lots to love about the Talon. Housed in a matte black 4mm-thick sandblasted aluminum body with options for tinted glass doors, the desktop is still understated enough for professional settings and provide plenty of power for rendering and editing jobs. Gamers who want a bit more flair can choose from a variety of different custom color paint jobs.

The design of the Talon 20th Anniversary Edition commands a premium over the older Talon 4.0 case. The new, modern design adds $247 to your build cost. Given the high-end appeal of the Talon, configurations start at $2,805, though upgrades and add-ons will quickly add to the cost of the system. Its base starting price makes the Talon significantly less expensive than Apple’s Mac Pro, which will start at $6,000 when it launches this fall. Like the Mac Pro and the Neuron, the Talon can be configured with multiple graphics card, and the midsized tower can accommodate up to two Quadro RTX 8000 cards for creative use. Gamers will want to choose a configuration that maxes out with Nvidia’s GeForce RTX 2080 Ti in either a single or dual configuration bridged with NVLink. Processor options range from AMD’s 12-core third-generation Ryzen to Intel’s 18-core X-series processors.