It’s about time: Face ID may finally make its way to MacBooks 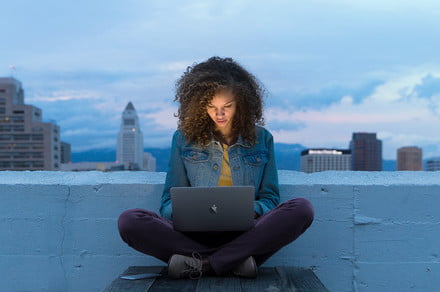 Face ID is one of those things that, once you’ve used it, everything that came before feels so primitive. It works almost seamlessly and is so much more secure than rival systems without being a burden or getting in your way. No more moving your finger a few inches to the designated Touch ID spot like a savage.

Yet its quiet success on iPhone makes me wonder: Why on earth is it not on the Mac yet?

Well, that may soon change, as Apple has just been granted a patent for a Face ID-like system that can be implemented in a MacBook. As I opined last month, this is long overdue.

The patent was filed back in 2017, before the iPhone X’s launch brought Face ID into the light of day. Its basic idea is that a Mac could be equipped with a set of sensors that detect when you’re near your Mac and, like the dancing elves staring through my bedroom window at night, prevent it from going to sleep.

Once you penetrate the dense patent-speak, it seems to us this is describing a system that could potentially log you in to your Mac if it recognizes your face. In other words, Face ID for the Mac.

Apple announced Face ID during the unveiling of the iPhone X on September 12, 2017.

This seems like such an obvious thing to do that it’s a wonder Apple still hasn’t implemented it yet. But then, Apple is never one to rush something that seems obvious. The iMac’s Magic Keyboard still doesn’t have a Touch Bar or even a Touch ID button, for example (interestingly, though, this idea is also mentioned in the patent). Rest assured that if there’s a feature that seems logical and isn’t yet in an Apple product, Apple will get to it eventually. Probably. Maybe.

Face ID is arguably much more of a challenge to integrate into an iPhone than a MacBook, as there’s much less space to work with on the former. Internal space is so limited inside an iPhone that Apple infamously had to ditch the 3.5mm headphone jack to free up room for other components. As for screen space, the iPhone’s notch has probably generated more column inches (and imitators) than anything Apple has done in the past few years, barring perhaps the Touch Bar. If there’s one thing Apple knows how to do, it’s induce a collective aneurysm in the world’s tech press.

On a MacBook, though, space is much less of a concern. Apple is not going to ditch the webcam any time soon, and the extra sensors required for Face ID won’t take up much more space than the webcam already does.

So, what stopped Apple bringing Face ID to the Mac sooner? My guess is it has nothing to do with technical limitations — instead, it’s all about timing.

At WWDC 2019, Apple unveiled its latest privacy talking point: Sign In with Apple. This is a single sign-on system that attempts to marry convenience with rock-solid privacy and security. Instead of entering a password, you sign in with Face ID or Touch ID. Safe, secure and simple.

Consider this: Apple unveils Sign In with Apple, and shortly thereafter is granted a patent that could see both Face ID come to MacBooks and Touch ID come to the iMac. What’s the missing ingredient here? The password.

Could it be that Apple is waiting to bring Face ID to MacBooks until Sign In with Apple has gained traction and Touch ID is integrated into the iMac’s Magic Keyboard? That would see all the pieces fall into place in Apple’s war on the password.

Passwords have long been recognized as a serious weak spot in user security. Humans are lazy creatures, and we frequently opt for convenience over safety. We reuse the same passwords over and over again, putting our login credentials and my Ashley Madison VIP account at great risk.

Think about the PR boost Apple would achieve if it could claim to eliminate the need to ever use a weak password or remember a complex one. It would achieve that Holy Grail — convenience and security — that has so long eluded other firms. And we could all go on being lazy without risking our data.

Apple doing this would make a great deal of sense. Apple has spent the last few years positioning itself as a champion of user privacy and security. Many of its apps and features, from Apple Maps to MacOS Catalina’s Find My app, encrypt, anonymize or otherwise obfuscate your personal data to keep it private.

Eliminating the need for a password could seriously ramp up the security of Apple’s systems, thereby helping to keep your privacy protected.

You can already get a flavor of this if you have a recent MacBook and Apple Watch. If your Watch is unlocked, you can unlock your Mac by simply sitting down at your desk — your Watch tells your MacBook you’re a known quantity, and you’re logged in. And, of course, recent MacBooks come with a Touch ID button for another quick alternative to entering a password.

Face ID, though, would be just as convenient as the Apple Watch login method without requiring you to have another piece of Apple kit on your person. Just sit down and look at the screen and boom — in you go.

Of course, this may never come to fruition; Apple patents many things that it never actually puts into practice. But look at what else the company is doing – from Sign In with Apple to its privacy billboards — and you get the feeling this patent could be more than just a speculative idea on Apple’s part.

And thank goodness for that — we’ve waited long enough to get Face ID on MacBooks. Now how about working on giving us more iCloud storage space, eh Apple?