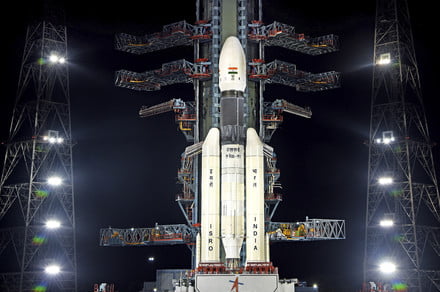 India’s uncrewed lunar mission entered into the moon’s orbit on Tuesday, bringing it within striking distance of its historic goal, according to an announcement from the Indian Space Research Organisation (ISRO).

The Chandrayaan-2 spacecraft is expected to land on the surface of the moon on September 7, making India the fourth country in the world to land there.

This lunar mission will also be the first to go to the moon’s south polar region. Chandrayaan-2 will operate on the moon for approximately one year, performing experiments in the area. The mission will be looking for possible signs of water.

“Chandrayaan-2 attempts to foster a new age of discovery, increase our understanding of space, stimulate the advancement of technology, promote global alliances, and inspire a future generation of explorers and scientists,” the ISRO wrote on its website.

ISRO first launched Chandrayaan-1 in October 2008. The mission orbited the moon taking photo-geologic mapping of its surface. The Chandrayaan-1 mission made more than 3,400 orbits around the moon before the ISRO lost communication with it in August of 2009.

India plans on a second lunar landing mission, known as Chandrayaan-3, that is set to launch sometime around 2024. That mission will be in collaboration with Japan’s JAXA space agency to deploy a lunar rover and lander for further exploration of the moon’s surface.

Even though the United States landed on the moon just over 50 years ago, the world has taken to a new fascination with it, particularly in exploring its unknown regions.

In the next decade alone, there are seven moon missions set to launch. Aside from India, the U.S., Japan, China, Russia, and possibly Israel are getting in on the moon action with their separate lunar projects.

NASA has plans to land humans on the moon once again by 2024. In July, NASA announced partnerships with 19 companies, including SpaceX, to advance commercial space and future NASA missions.

The last people to set foot on the moon were Eugene “Gene” Cernan and Harrison “Jack” Schmitt during the Apollo 17 mission in December 1972.

It’s not yet clear what kind of live programming the ISRO will broadcast for the September 7 landing. Digital Trends reached out to the ISRO for additional details, but have yet to receive a response.