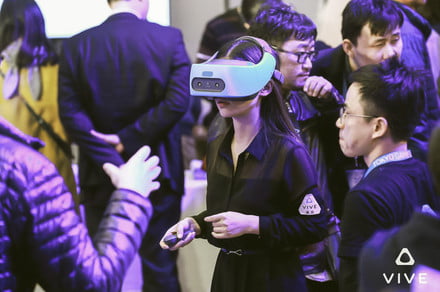 HTC is giving VR gamers untethered and unfettered access to titles made specifically for virtual reality with a new streaming subscription service. Dubbed Viveport Streaming, the service combines HTC’s wireless streaming hardware — which is designed to allow you to stream games from a VR-ready PC to a VR headset with built-in six-degree-of-freedom (6DoF) support using a 5GHz Wi-Fi connection — with its new Viveport Infinity VR subscription service.

HTC created its streaming VR subscription service as a way to make VR content more accessible, with the platform working much in the same way as Apple’s Arcade for iOS devices or Google’s Stadia gaming subscription. It gives gamers unlimited access to the more than 2,000 games and apps that are part of HTC’s library. The subscription service costs $13 monthly, or $9 a month if you prepay for a year, and also boasts more than 800 premium VR titles.

Though Viveport Streaming still requires a PC with discrete graphics from AMD or Nvidia, which makes them not quite as mobile as stand-alone virtual reality experiences like Oculus Quest or Oculus Go, it could help HTC compete against mobile-friendly virtual reality headsets from rival Facebook. In the future, HTC envisions 5G-based cloud VR replacing the need for a high-end VR-compatible PC to render the games.

“Viveport Streaming expands the accessible content for stand-alone devices from hundreds of titles to many thousands instantly, by enabling one-click access to the entire existing PC VR content library,” HTC said in a statement. “This will allow users to enjoy high-quality VR content rendered from a high-end PC without having to worry about a wired connection or buying an additional VR streaming accessory.”

Initially, the streaming service will be supported by HTC’s Vive Focus Plus, an enterprise-centric headset that was introduced earlier this year, It features built-in sensors for 6DoF tracking, though the company said that more stand-alone VR devices built on top of the Vive Wave VR platform will be compatible later.

The streaming service was announced at the ChinaJoy 2019 conference, an event where HTC also showcased the Nostos game. Described as an open-world role-playing game created by NetEase, the game offers a multiplayer experience where gamers can fight and explore in different worlds and biomes. The title will launch in the fourth quarter this year. HTC also announced its new 6DoF interactive Viveport Video Player, which allows users to walk up to any 360-degree or 180-degree video and be even more immersed into the content playing on their screens.

Facebook
Twitter
Pinterest
WhatsApp
Previous articleThese are the cheapest data plans you can buy in the U.S.
Next articleScore savings on Alienware m15 and Alienware 17 gaming laptops in Dell deal

"We've always said that if Google Maps is about finding your way, Google Earth is about getting lost."What you need
Read more
News

Play it now!What you need to knowCeleste is an excellent platforming game from Matt Makes Games.Google Stadia is a cloud
Read more
News

Streaming services have grown in popularity over the past few years, and there are now more options than there ever
Read more

How to quickly access notifications on your Samsung Galaxy phone

Getting a ton of notifications can be rather annoying, and that's made especially true when accessing said notifications isn't very
Read more

Play it now!What you need to knowCeleste is an excellent platforming game from Matt Makes Games.Google Stadia is a cloud
Read more

Streaming services have grown in popularity over the past few years, and there are now more options than there ever
Read more