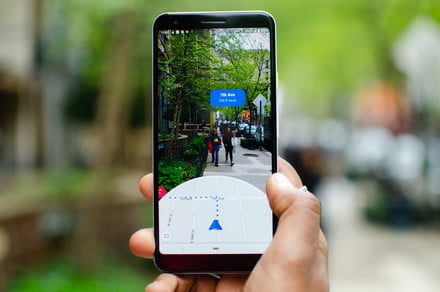 The augmented reality walking directions feature in Google Maps is about to be made available on more devices. Google has announced its Live View AR walking mode will come to Android phones that support ARCore, and iPhone models that support ARKit this week. The feature has been available for Pixel phones for some time, after being initially announced during Google I/O in 2018.

Google is quick to point out the feature is still in beta, pre-warning those who try it that it may not operate as faultlessly as using Google Maps normally, but don’t let that put you off giving it a spin. Live View uses the camera on your phone so you can see the world around you, then overlays arrows and directional information to make finding the way to your destination easier.

Now you’re asking, which phones will work? ARCore is the name for Google’s augmented reality software platform, and although not every Android phone supports it, the vast majority made over the past few years will be fine. Google has an extensive list of ARCore-compatible phones here, and it includes everything from the LG G6 to the Huawei P30 Pro, every OnePlus phone since the OnePlus 5, most Samsung phones since the Galaxy S7, and many more. There’s a very good chance your phone will be on the list.

For Apple iPhone owners, your phone needs to work with ARKit, which is Apple’s augmented reality software platform. Every iPhone since the iPhone 6S (including the iPhone SE) is compatible, along with all iPad Pro tablets, plus the 5th and 6th generation iPad too. Provided you’ve upgraded your iPhone since the iPhone 5S, and have the Google Maps app installed, you should be able to use Live View walking directions without a problem.

If you want to know more about how to use Live View in Google Maps before jumping in, we’ve got a comprehensive guide here. If you just want to try it out, open the Google Maps app, find a destination to walk to, tap Directions and select walking, then look for the Live View option at the bottom of the screen. Don’t worry if it’s not there yet, Google says the feature will be coming out over the next week.