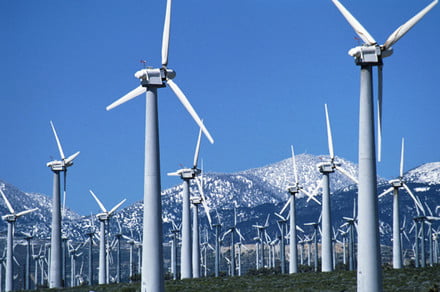 Sustainable energy sources like wind power are all well and good, but the unfortunate reality is that there simply isn’t enough free land to create the massive numbers of wind turbines that would be needed to make them a viable replacement for our current methods of energy production. Is that right? Well, don’t make the mistake of saying that to researchers with a love of number-crunching. Because they’ll run the numbers and make you feel a little bit foolish.

At least, that’s our takeaway from a new piece of research coming out of Denmark’s Aarhus University, the U.K.’s Imperial College Business School, and other institutions. They’ve worked out that there is, in fact, sufficient available land in Europe alone to house the millions of wind turbines necessary to power the entire world. Even adjusting for future growth.

“The continuous development of onshore wind farms is an important feature of the European transition towards an energy system powered by distributed renewables and low-carbon resources,” the researchers write in their paper’s abstract. “This study assesses and simulates potential for future onshore wind turbine installations throughout Europe. The study depicts, via maps, all the national and regional socio-technical restrictions and regulations for wind project development using spatial analysis conducted through [Geographic Information System mapping]. The inputs for the analyses were based on an original dataset compiled from satellites and public databases relating to electricity, planning, and other dimensions.”

The TD;DR version? They conclude that 4.9 million square kilometers, approximately 46% of the land in Europe, could be used to build wind farms. This would not include land that is considered too close to settlements, protected areas, or difficult-to-build-on areas like mountainous regions. This land could be used to support 11.6 million wind turbines, producing 52.5 terawatts of electricity. Not only would this be sufficient to power the world, circa 2019, but it would “be sufficient to cover the global all-sector energy demand from now through to 2050.”

That’s plenty of time for us to figure out new ways of optimizing wind power, developing other sources of sustainable energy, lowering consumption or, heck, finally getting on with building some off-world space colonies. Of course, whether this study will actually be listened to by global governments remains to be seen. But it’s certainly a fascinating, and gratefully received, data point.

The team’s research, unambiguously titled “How much wind power potential does Europe have?”, was recently published in the journal Energy Policy.