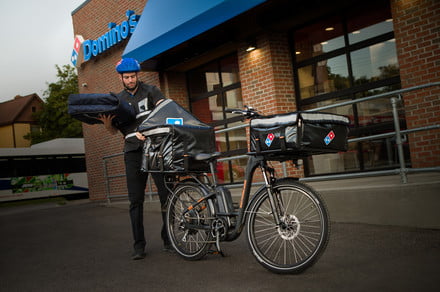 Your Domino’s pizza could now be delivered to you via ebike, according to an announcement from the pizza company on Tuesday, August 13.

Through a partnership with Rad Power Bikes, Domino’s is hoping to solve the problems of traffic congestion and the difficulty of finding parking for those delivering pizza in a car. According to the press release, the ebike deliveries were tested in corporate-owned stores located in Houston, Miami, and New York, and Domino’s said that these locations had improved delivery.

The custom bikes made for Domino’s have both front and rear insulated cargo areas that can carry up to 12 large pizzas. Compared to traditional bikes, ebikes have motors equipped within the bike to assist the bicyclists with pedaling, which can come in handy for uphill riding. The bikes can reach up to 20 mph in assisted speed.

“While delivery on a traditional bike solved many of our traffic and parking issues, the hills in Seattle were tough on even our best cyclists. Ebikes were a game-changer for us, and we’ve been delivering with them for three years now. We have been able to save money, provide better service, increase hiring and maintain a happy workforce,” said Greg Keller, a Seattle Domino’s franchisee, in the press release.

Salt Lake City and Baltimore will join the stores already utilizing ebikes for pizza delivery by the end of this year. Domino’s also said the ebikes would enable the stores to hire employees who don’t own a car or who don’t have a diver’s license.

The use of ebikes is the latest way Dominos has provided alternate options for pizza delivery to their customers by means of innovative tech. In recent years, Domino’s has debuted a custom pizza delivery vehicle, a driverless pizza pod, drone deliveries, and even an in-car pizza-ordering app.

Last year, Domino’s also introduced Domino’s Hotspots, which allows you to order a pizza from non-traditional delivery locations like a public park, a stadium lot, beaches, monuments, and more.

Pizza Hut has also tried to come up with innovative ways to order pizza, like its Pie Tops smart shoes concept and even a “Pizza Parka.”