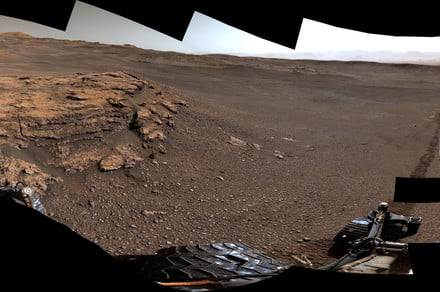 The Mars rover Curiosity just celebrated its seventh birthday, having been exploring Mars for seven years since it landed on August 6, 2012. And it has been busy as ever, recently drilling its 22nd hole in the Martian rock.

Curiosity is halfway along its path through a region called the “clay-bearing unit” because the area has a high level of clay minerals. Clay minerals are of particular interest to scientists because they form in the presence of water, suggesting that there used to be water in this location thousands of years ago. The clay-bearing unit is located on one slope of Mount Sharp, a large mountain located inside the Gale Crater.

This panorama of a location called “Teal Ridge” was captured on Mars by the Mast Camera, or Mastcam, on NASA’s Curiosity rover on June 18, 2019, the 2,440th Martian day, or sol, of the mission. NASA/JPL-Caltech/MSSS

“This area is one of the reasons we came to Gale Crater,” Kristen Bennett of the U.S. Geological Survey, one of the co-leads for Curiosity’s clay-unit campaign, said in a statement. “We’ve been studying orbiter images of this area for 10 years, and we’re finally able to take a look up close.”

The orbiter images Bennett mentions are captured by the Mars Reconnaissance Orbiter, a craft in orbit around Mars that captures images of the planet’s surface. There’s something strange going on with the clay on Mars, however. When scientists looked at the orbiter data, they saw clay only in a relatively small area of the clay-bearing unit. But since Curiosity has been exploring, it has detected clay in many areas of Mount Sharp. At first, they weren’t sure why the orbiter and the rover would detect such different amounts of clay.

Now, scientists think that the issue may be the many small rocks and pebbles that Curiosity has encountered on the surface of Mars. According to the other co-lead of the project, Valerie Fox, the pebbles are too small for the orbiter to see. But if many of them are in one area, they may look like one large patch of clay to the orbiter. Another possible issue is the dust that blows across the planet. The dust can settle on flat rocks, obscuring the signals that the orbiter can detect from space.

The engineers estimate that the rover still has several years of power left in its nuclear power system, and will be able to continue operating beyond that with careful power budgeting. Here’s hoping for seven more years of Martian data.