Biologists create an ‘eyeball on a chip’ that actually blinks 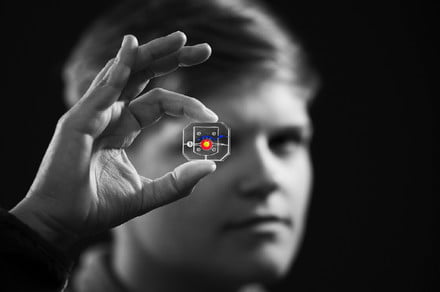 Researchers at the University of Pennsylvania’s School of Engineering and Applied Science have developed a human eye replica that’s actually capable of blinking. But don’t worry, they’re not going to team up with the researchers creating robot muscles to start assembling Skynet’s first Terminators; they’re using it as a way to develop treatment for eye diseases.

The eye in question acts very much like the real thing it’s modeled on. It features a motorized, gelatin-based eyelid that’s designed to spread moisture across its corneal surface. The eye itself is comprised of real human eye cells, which are grown on a porous scaffold created with the aid of 3D printing. The cells reflect the makeup of an actual eye, with corneal cells growing on the innermost bit, surrounded by conjunctiva, the tissue that covers the white part of our eyes. When the eye blinks, it spreads tears across the eye’s surface just like the real thing.

If you’re wondering why the different parts of the eye are dyed various primary colors, it’s because this enables researchers to see how the eye is responding.

“From an engineering standpoint, we found it interesting to think about the possibility of mimicking the dynamic environment of a blinking human eye,” Dan Huh, associate professor in the department of bioengineering, said in a statement. “Blinking serves to spread tears and generate a thin film that keeps the ocular surface hydrated. It also helps form a smooth refractive surface for light transmission. This was a key feature of the ocular surface that we wanted to recapitulate in our device.”

The big idea is that developing a so-called “eye-on-a-chip” makes it possible to test different treatments for eye conditions without having to do so on real organs. In doing so, it could be used to help develop treatments for ailments like dry eye disease (DED). This affects around 14% of the world’s population, but has so far proven difficult to develop effective treatments for. Since 2010, there have been 200 failed clinical drug trials for DED alone. Only two Food and Drug Administration-approved drugs are currently available for treatment.

This is just the latest organ-on-a-chip project to come out of labs. For example, at MIT engineers have developed a body-on-a-chip model which connects tissues engineered from up to 10 different organs. This allows it to mimic mechanisms throughout the human body, with the goal of working out how drugs designed to treat one specific organ might have an effect on other organs in the body.