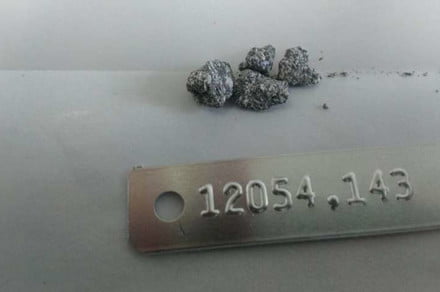 The moon is 100 million years older than we thought, according to a new study from the University of Cologne’s Institute of Geology and Mineralogy.

The finding was spurred by analysis of a sample taken by the Apollo 11 mission, which is still bearing scientific fruit 50 years later. To determine the age of the sample, the scientists examined the elements it is composed of, looking at rare elements like hafnium, uranium, and tungsten. “By comparing the relative amounts of different elements in rocks that formed at different times, it is possible to learn how each sample is related to the lunar interior and the solidification of the magma ocean,” Dr. Raúl Fonseca of the University of Cologne, a co-author of the study, explained in a statement.

This sample is an ilmenite basalt collected during Apollo 12. It has glass on it, deposited by the splash of material when another basalt was struck by an impactor. Samples like 12054 allow us to reconstruct the history of the Moon with the stories they tell. Maxwell Thiemens

Hafnium and tungsten are particularly useful as targets of study as they exhibit radioactive decay which only occurred in the first 70 million years of the Solar System. By examining the isotopes of the Apollo samples and comparing them to laboratory experiments, the scientists found evidence that the moon began forming earlier than previously thought.

The moon was likely formed in a massive impact when a planet the size of Mars struck the Earth. The impact threw up a large amount of dust and rocks into orbit around Earth, which gradually solidified into the moon. When it was first born, the moon was covered by an ocean of magma, which eventually cooled into rock.

This new study is uniquely valuable as these observations can give insights into how planets are created and are only possible on the moon rather than on Earth, Dr. Peter Sprung, co-author of the study, said in the same statement: “Such observations are not possible on Earth anymore, as our planet has been geologically active over time. The Moon thus provides a unique opportunity to study planetary evolution.”

The findings are published in the journal Nature Geoscience.