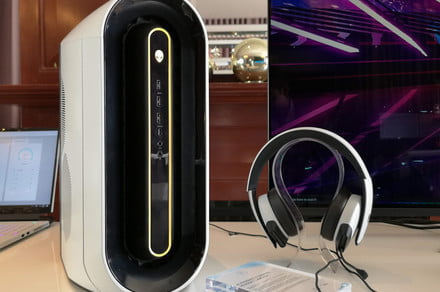 Though it’s built on the same chassis as the previous generation Aurora R8 gaming desktop, this year’s Alienware Aurora R9 stands in stark contrast from its predecessor with a sleek, modern design. Shedding the asteroid-inspired appearance of its predecessor, the Aurora R9’s design has been reimagined, taking inspiration from science fiction with an overall shape that more closely resembles an elongated jet engine, said Justin Lyles, Dell’s vice president of consumer design, at a showcase in San Francisco ahead of the desktop’s launch at Gamescom. The desktop sports Dell’s Legend design identity that debuted on the Alienware Area 51 laptop earlier this year.

With a sculpted appearance where the front of the tower is more compact than the rear, Alienware gamers who pick up this desktop will do so for its design rather than its space-savings capabilities on a desk.

Measuring 18.9 inches tall, 17 inches long, and 8.771 inches wide, the Aurora R9 swaps the bulbous side panels from its predecessor in favor of straight side panels that form a trapezoidal footprint when placed on your desk, and both desktops will occupy more space on your desk than similarly configured PCs with a more basic rectangular design. The extra volume in the rear and top is not wasted or purely ornamental, Lyles said, as this space serves a useful cooling purpose. The top houses the radiator.

“We didn’t want to create another rectangular box,” Lyles said, though he admitted that the Aurora’s design will be polarizing, a fact that Dell actually embraces as it sparks conversation. “Either you love it or you hate it, but that’s OK.”

Reminiscent of the engine on a jet, vents are found alongside the oblong-shaped front panel, and Alienware added an oval, Tron-esque LED ring — known as stadium lighting, after the shape from which it was inspired. The design is definitely unique, but it’s still understated enough for creatives who want the workstation performance of the Aurora’s dual-GPU setup in a more professional setting.

There were several reasons why Dell wanted to reuse the same chassis this year, rather than start fresh. First, the company invested significant resources in designing the pull-out steel bracket for the power supply, which doesn’t require any tools to access. Modernizing the overall design with a glass panel, Dell’s design team noted, wouldn’t provide any visual interest as the power supply bracket occupies a lot of space and doesn’t look too visually appealing despite its functional nature. The second reason is that the R9 is available in similar configurations as the R8, so an entirely new design wasn’t required. Like the R8, this year’s desktop maxes out with Intel’s 9th-Gen Core i9 processor and Nvidia’s RTX 2080 Ti graphics, with the option to configure the system with dual-RTX 2080 cards from the factory.

Also available in Dark Side of the Moon color scheme

The Aurora desktop will be available on Tuesday, August 20, in North America, starting at $969. The desktop comes in two colors, a monochromatic black called “Dark Side of the Moon,” or a black-and-white combo called Lunar Light that’s been seen most recently on Alienware’s 2019 gaming laptops, such the Area 51 model.

If you don’t need the power of dual-graphics, Dell’s new G5 may be a better fit. Like the Alienware Aurora R9, the Dell G5 made its debut at Gamescom, but unlike the Aurora, the G5 is a Dell-branded desktop that doesn’t fall in the premium Alienware family.

The compact G5 gaming desktop tower measures just 14.45 x 6.65 x 12.12 inches, and tops out the same Intel Core i9 processor as the Aurora. In the graphics department, the G5 can be configured with up to Nvidia’s GeForce RTX 2080, which still delivers plenty of ray tracing capabilities for most gamers. Like most modern gaming desktops, the G5 comes in a rectangular silhouette with a large glass side panel, metal case design, and a patterned front. This desktop launches on Wednesday, August 21, with a starting price of $749.