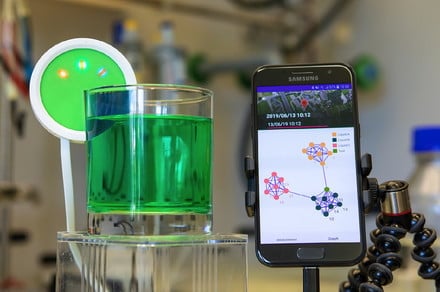 With its Watson technology, IBM has helped create a pretty convincing artificial brain. But now it’s seemingly ready to move onto other body parts as well — and it’s settled on the tongue as a next step. As developed by computer scientists at IBM Research, the A.I.-assisted e-tongue is a portable device, equipped with special sensors, that allow it to taste and identify different liquids.

“We’re very good as humans at being able to recognize different liquids,” Patrick Ruch, one of the researchers working on the e-tongue project, told Digital Trends. “While we can’t necessarily work out the exact quantities of components within liquids, we can do things like recognize the same liquid over and over again. That’s something we set out to replicate with this project.”

The handheld tongue (which isn’t quite as gross as it sounds) takes the form of a sensor array, which can be dipped in different liquids to sample their taste. Using pattern matching technology, augmented by machine learning, it’s able to work out the composition of the liquids it tastes and match them to different liquids already in its data set.

In a demonstration this week at the 11th World Conference of Science Journalists in Lausanne, Switzerland, the e-tongue was demonstrated by distinguishing between different brands of local bottled water. It managed to do this both accurately and consistently.

“What we’ve developed with this project is an end-to-end solution to convert chemical fingerprints into digital fingerprints,” Ruch continued.

One obvious application for this technology would be in the culinary industry, he said, where it could be used for things like sampling the vintage of different red wines. However, its classification use cases go far beyond that.

“It could be very useful for any scenario in which you want to check the composition of a particular liquid very quickly,” Ruch noted. “For instance, if you want to check that a particular food has come from the producer it says on the label this could be used. You can also imagine it in the case of non-foodstuffs, where an industrial supplier is supplying you with raw materials and you want to be sure that it’s always coming from the same place. You can easily re-label liquid, but you can’t change the chemical identity of the liquid without changing its function.”

He suggested that it could additionally be used for things like sampling different biofluids, such as urine, to make health-related diagnoses.

“The goal is definitely to grow the database of liquids,” Ruch said. “We’ve shown off the platform as a proof-of-principle, so the next step would be to create modifications depending on the use case.”