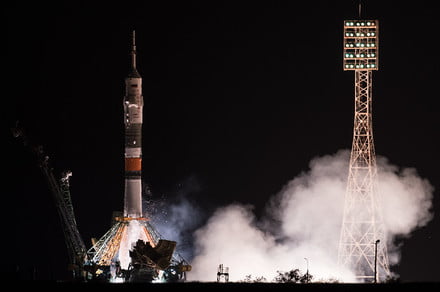 Exactly fifty years after Neil Armstrong and Buzz Aldrin set foot on the moon, a new team of astronauts arrived at the International Space Station (ISS) to begin their stay there. The launch took place on Saturday, July 20, 2019 from the Baikonur Cosmodrome in Kazakhstan at 12:28 p.m. ET (9:28 p.m. Baikonur time) to carry the astronauts to the ISS.

Together, the new crew will spend more than six months on the station, performing scientific experiments and testing space equipment. The scientific research will include “investigations in fields such as biology, Earth science, human research, physical sciences, and technology development,” according to NASA, which will test the ways in which the low gravity environment affect outcomes. The experiments will include growing moss, printing biological tissue, and attempting a process called bio-mining which extracts metals from ores using fungi.

In addition, the crew will also be taking part in the arrival and installation of a second docking port aboard the station. This second dock will be for commercial crew spacecraft, such as those being developed by SpaceX and Boeing. The International Docking Adapter-3 (IDA-3), as it’s known, will be launched in a few days’ time as part of SpaceX Dragon’s 18th commercial resupply services mission on July 24. If you’re interested to see the launch as it happens, you can watch a livestream on NASA’s website.

Upon arrival, the docking port will be removed from the Dragon’s cargo hold using the ISS’s robotic arm, Canadarm2, and put into place. It will be installed over Pressurized Mating Adapter-3, which is part of the Harmony module. Astronauts Hague and Morgan will perform a spacewalk in August to install the docking port, and while they’re out there they will also install a new high-definition camera to monitor the exterior of the station. This is part of an ongoing mission to update the camera systems outside the station.