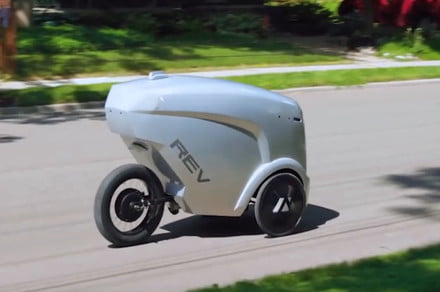 As many folks continue to look skyward in expectation of drone delivery services, they’re missing the development of an increasingly popular delivery technology back on terra firma.

Wheel-based delivery robots may not be quite as sexy as their flying counterparts, but with fewer regulatory hoops to jump through than drone services, the technology is likely to become more widely used sooner rather than later by companies looking to make their delivery operations more efficient.

The latest outfit to join the race is U.S. startup Refraction A.I. with its autonomous Rev-1 machine.

The brainchild of University of Michigan professors Matthew Johnson-Roberson and Ram Vasudevan, the Rev-1 tootles along on three wheels instead of the four or six that we see with most of the competition. The wheels and storage compartment mean the look of the Rev-1 is similar to efforts from dominant player Starship Technologies, as well as delivery robots from FedEx and Amazon. Meanwhile, more extreme variations include the Digit from Oregon-based Agility Robotics, which has created a bipedal robot capable of tackling steps and other obstacles that cause problems for most — though not all — wheel-based bots.

The Rev-1 tips the scales at about 100 pounds and can reach a speed of up to 15 mph, making it 5 mph faster than Starship’s machine. Its storage compartment offers 16 cubic feet of space, which the company says is good for around four or five grocery bags.

As with similar machines, when the Rev-1 arrives at its destination, the recipient can unlock the storage box by entering a one-time code into the robot’s keypad.

The self-driving robot uses 12 cameras as its main sensor system though it receives extra situational data via radar and ultrasound sensors. Similar robots also use lidar and fewer cameras, but Johnson-Roberson said that its system is reliable enough to eliminate the need for pricey lidar technology — a decision that’s enabled it to keep costs down and price the Rev-1 at $5,000.

Johnson-Roberson describes the Rev-1 as “lightweight, nimble, and fast enough to operate in the bike lane and on the roadway,” adding that it can also handle rough weather conditions that have the potential to slow down or hinder competing machines.

Refraction A.I. says its first test application is with restaurant partners, with the company hoping to expand to other areas of last-mile delivery over time.