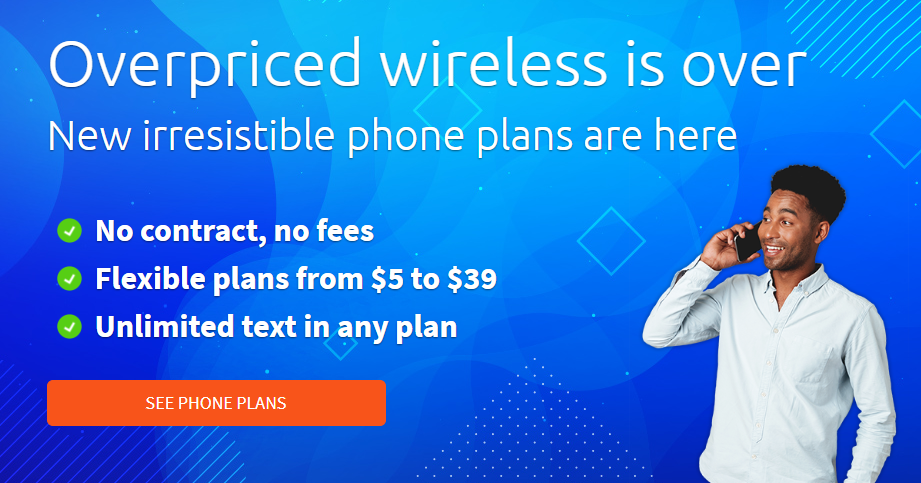 Just about anyone you’d ask is familiar with the top-tier wireless service providers in Verizon, AT&T, T-Mobile, and Sprint. What about lesser known, or newer brands?

Some companies, like Boost, Metro, and Cricket, do a great job of advertising on TV and media but there are others like Net10 who have a small presence in the space through retailers.

Let’s take a look at a relatively upstart carrier, Tello. This guide will serve to help you understand what the MVNO offers and how it competes in the mobile arena.

Tello rate plans are no-contract, meaning you can go month-to-month with no long-term agreement, cancellation, or activation fees. Moreover, they do not charge for going over your allotted data. Hit your threshold and you’ll find your speeds slowed for the remainder of the billing cycle.

Customers can mix and match rate plans based on personal needs. A lot of users have access to Wi-Fi connections, or don’t make many calls in a month. To that end, it’s possible to dial things up and down to suit tastes. What’s more, one can change their plan as often as needed.

In addition to the aforementioned countries, Tello subscribers can make calls to other India, Cuba, and a host of other countries. Each has its own rate and can be used in a mix-and-match fashion. All one need do is purchase a Pay As You Go credit ahead of time. The credit can also be used for SMS or data, depending on which plan you’re signed up with at the time.

Taking a look at the current lineup of phones offered through Tello we find familiar names from brands like LG, Samsung, and Motorola as well as Kyocera and Alcatel. All told, there are more than two dozen phones to choose from.

As is often the case with prepaid providers and MVNO brands, selection is a mixed bag and skews more toward affordability versus power.

About half of the current roster is comprised of refurbished phones. We do recognize there are some popular devices such as the Samsung Galaxy S8, Galaxy S7, and Motorola E4 and E4 Plus with sizable discounts.

Bring Your Own Device

You can use any Sprint-compatible phone just so long as there’s no unpaid balance on another network. What’s more, you’ll need to ensure it’s unlocked for use outside of Sprint if it was previously used with another carrier.

Motorola made just the right changes to give the Edge the cost advantage it needs compared to its performant stablemate.
Read more
Reviews

A great sounding pair of fitness earphones? Sign me up.
Read more
Reviews

QLango: Learn 30+ languages in a fun and easy way

Just about all of us have taken a foreign language as part of a school curriculum. While that’s a great way to learn a new language, it’s not for everyone.We all have our own ways of learning and not every has the same amount of time to do so. Moreover, we all have different speeds that we learn, too. Fortunately, there are fun and innovative ways to master a new language.Rather than taking the same old approach that most language apps do, Qlango goes about it an interesting way. It’s more or less games that are fast, fun, and simple.The all-in-one app lets you learn from nearly three dozen languages at a pace that works for you. Right now a lifetime subscription is available for half off, or just $44.99.QLango FeaturesTranslate texts from a language you know to a language you are learningWrite dictated textsSearch for the correct answer among 4 suggested onesUnscramble the correct answerCreate a sentence from given wordsLearn more languages at the same time by writing, reading, listening & revisingChoose from 5 different learning modes or customize any or all of themUse innovative & useful 3-stage hints to find the correct answerAcquire knowledge by translating to the language you are learning & not vice versaTrack statistics with Qlango elephant (don’t worry, it has memory like a real elephant)Brag about your results and share them on FacebookComplete your weekly plan on the first or on the last day of the week (or any day in between)With Qlango you can learn Albanian, Arabic, Dutch, Finnish, English, Spanish, and more languages through fast, simple, and fun games. You will be acquiring knowledge by translating to the language you are learning and not vice versa. It won’t waste any of your time and effort too! Each Qlango lesson (or game) lasts a maximum of five minutes and examples are most often used in conversations.AvailabilityLearn a new language the cheap and easy way with you lifetime subscription to QLango. Just $44.99 — 50% off for a limited time — it’s available in the AndroidGuys Deals Store today.Best SellersEarn Credits!For every $25 you spend in the AG Deals Store you get $1 credit added to your account. And, if you refer the deal via social media or an email that results in a purchase, you’ll earn $10 credit in your account.First Time Buying?If this is your first time buying, you are also eligible for 10% discount! Just be sure to subscribe for email updates.Free StuffNot looking to spend any money today? No worries. You can still visit the AndroidGuys section for freebies and pick something anyhow.
Read more

How to take a screenshot on an iPhone XR

There are many ways to screenshot on the iPhone XR. Here's how to do it with side buttons and assistive touch.
Read more

The feature has been in development for months.What you need to knowWhatsApp may soon allow users to use their account
Read more

What accessories did you buy for your Galaxy Note 20?

Chatting with the AC forums.The Galaxy Note 20 and Note 20 Ultra are official. Both phones are now up for
Read more