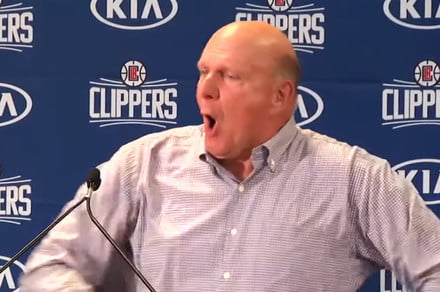 Former Microsoft boss Steve Ballmer showed he’s still as pumped as ever when he welcomed NBA stars Kawhi Leonard and Paul George to his L.A. Clippers team at a press conference in the city this week.

The first sign that he was about to launch into one of his famously passionate outbursts came when he told the gathered reporters he was discarding a prepared speech before bellowing excitedly: “I’m just fired up to be here today.”

Ballmer then turned the enthusiasm dial all the way to 11, shouting, “It’s pretty cool, it’s pretty damn cool,” before clapping his hands with such force that some of those watching probably wondered if they might suddenly detach from his wrists. Fortunately, they didn’t.

Things have been kind of quiet at Microsoft since Ballmer stepped down as CEO in 2014. Well, quiet in terms of stage events hosted by the company, that is.

Ballmer was well known as the boss of the computer giant, though this was mainly because of the insane levels of energy that he displayed at company events and in TV ads; energy that sometimes left him sweating profusely through his shirt as he bounced manically across the stage with all the energy of a 5-year-old.

At one event, the former Microsoft chief told his audience that “developers” were key to building a successful tech company. In fact, he was so adamant about it that he said the word not once but 14 times in a row (possibly more), all while holding a facial expression that seemed to suggest he was about to lose his temper. Some in the crowd may well have been terrified.

Asked by Conan O’Brien four years ago how he manages to hit the stage in such a heightened state of insanity, Ballmer replied, “Iced tea, iced tea, iced tea.” If Conan was thinking there may have been something in that iced tea, he certainly didn’t say.

His ebullient manner may, however, have come at a cost, with a number of media reports suggesting that he once required surgery on his vocal cords after ripping them at a sales meeting while screaming, “Windows! Windows!” (We assume he was referring to Microsoft’s operating system rather than acknowledging the existence of glass panels in the room.)

Fortunately, the former tech guy’s voice box appeared to suffer no such calamity at this week’s Clippers press conference. It was great to see Ballmer back to his (not quite but almost) bonkers best.

The Polk Audio Command Alexa-enabled sound bar is down to $199 on Amazon. This deal is a match for its
Read more
News

Upload your favorite images to the app, and they'll instantly appear on the digital frame.Ever since I adopted my cat
Read more
News

Amazon is making huge changes to its pandemic Prime Days

It all starts in India later this week.What you need to knowAmazon will host its first COVID-19 Prime Day later
Read more

The Polk Audio Command Alexa-enabled sound bar is down to $199 on Amazon. This deal is a match for its
Read more

After a near-five month break, Europa League football returns today. A number of teams are picking up where they left
Read more

Upload your favorite images to the app, and they'll instantly appear on the digital frame.Ever since I adopted my cat
Read more

Amazon is making huge changes to its pandemic Prime Days

It all starts in India later this week.What you need to knowAmazon will host its first COVID-19 Prime Day later
Read more