Home Reviews Sony WH-XB900N review: How much bass is too much bass?
Reviews

Sony WH-XB900N review: How much bass is too much bass? 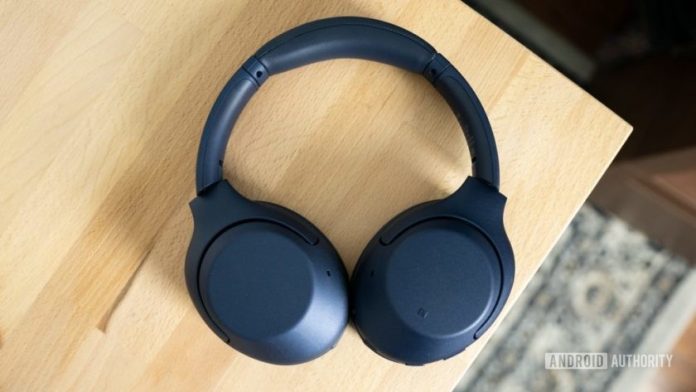 Whether you work remotely or commute, chances are you’re constantly on-the-go, making quiet time a rare indulgence. Sony recently released a more affordable pair of ANC headphones, the Sony WH-XB900N, to accompany you on your daily subway excursion. These bass-heavy, lightweight cans are a great Beats alternative and boast Sony’s top-tier noise-canceling technology for less than the rest.

Read the in-depth review at SoundGuys

The minimal design is reminiscent of the WH-1000XM3 headphones, with a touch-sensitive earpad for controlling music playback.

These are lightweight for on-ear headphones (254g), which is especially important if you intend to use them for travel. Ample memory foam padding on the headband and ear cups make it easy to wear these comfortably for hours at a time. Airflow isn’t great and this can lead to a damp experience in warm environments. Just like other noise-cancelling headphones we’ve seen, these fold and rotate so they can lie flat on a table.

Buttons rest on the left ear cup and may be remapped with the Sony Headphones Connect app. The same ear cup also houses a 3.5mm headphone jack and USB-C input. The headphones provide 44 hours, 22 minutes of playback and support quick charging: 10 minutes of charging affords one hour of listening. A full charge cycle requires around 4 hours. On the other side, the right ear cup is reserved for touch and gesture control. From here, you can adjust the volume, skip tracks, and enter Quick Attention mode by holding the right housing. 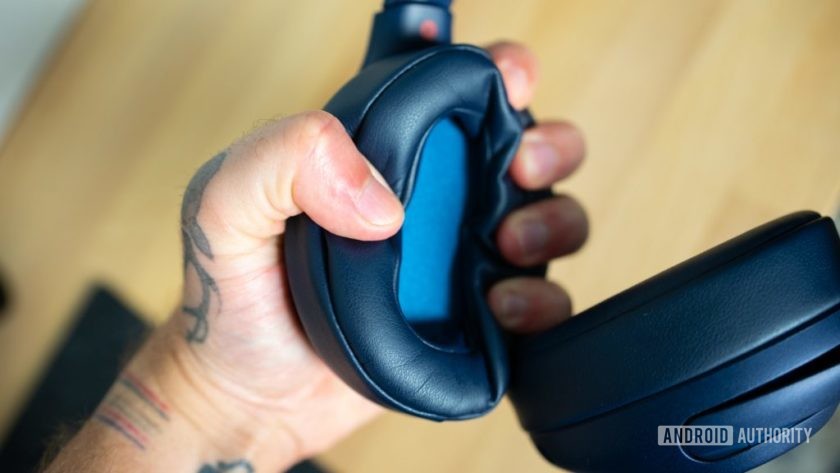 The plush padding on the Sony WH-XB900N is super comfortable and does a good job at helping with isolation as well.

The headphones integrate both Google Assistant and Amazon Alexa, meaning you benefit from having incoming notifications read aloud, setting reminders, sending texts, and more. All of these functions may be initiated by saying, “Ok Google,” or “Alexa” to command the assistant of your choice. 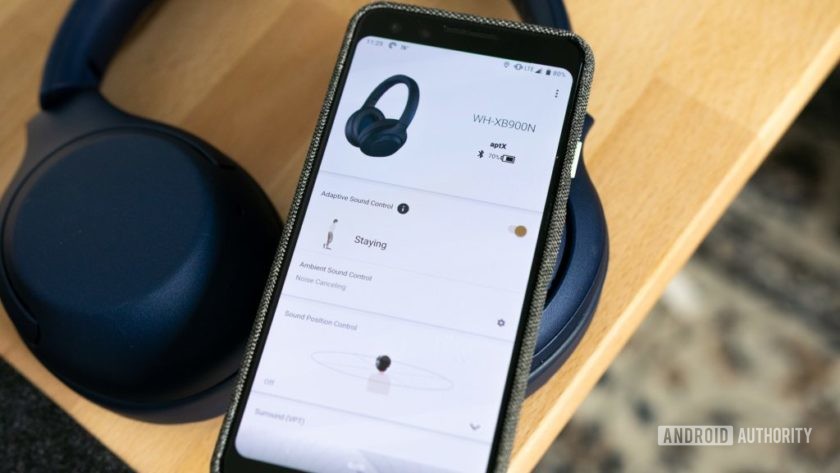 The app lets you fine-tune everything from what the custom button does to how your music sounds.

Pairing the headphones to your device is seamless. Upon powering on the WH-XB900N for the first time, a window pops up on your phone to initiate pairing. (In order for this to happen, Bluetooth must be active on your phone.) You can also pair via NFC. Generally speaking, connection strength is consistent and reliable. During SoundGuys’ testing process, playback skips and audio-visual lag were non-existent.

While it’s disappointing to see Bluetooth 4.2 firmware, rather than Bluetooth 5.0, Sony compensates for this by providing a host of high-quality codec support. You have five streaming options: LDAC, aptX, aptX HD, AAC, and SBC. As SoundGuys’ research has shown, Bluetooth codecs are imperfect and performance varies greatly depending on the source device.

The headphones support a slew of high-quality Bluetooth codecs, compensating for the older Bluetooth 4.2 firmware.

The Sony | Headphones Connect app lets you make granular EQ adjustments, prioritize connection strength or streaming quality, and more. That said, in order to use any of the Sony presets, streaming quality is bumped down to SBC. You can also use the app to adjust noise-cancelling intensity and reposition the sound, meaning you can choose your music’s directionality. It’s not quite as immersive as Creative’s Super X-Fi technology, but it’s a neat trick.

How do they sound?

These are ridiculously bass-heavy, which makes sense seeing as the “XB” moniker is emblematic of Sony’s “extra bass” product line.

Adam Molina, SoundGuys editor, was stunned by the emphatic low-end when listening to The Beatles’ song Ob-La-Di, Ob-La-Da. For anyone familiar with the celebrated band, you know that song is, in fact, not a banger. Midrange frequencies are masked by the low-end, but not to the extent you may expect, and treble notes remain audible without erring on the side of grating.

On the other hand, microphone quality is superb. Adam’s voice sample below is reproduced realistically. Since the microphone has a neutral-leaning response, nearly all frequencies are relayed with equal loudness. Ultimately, this means that no matter what your vocal register, this headset will make you sound good … or at least accurate.

Do they block out noise well? 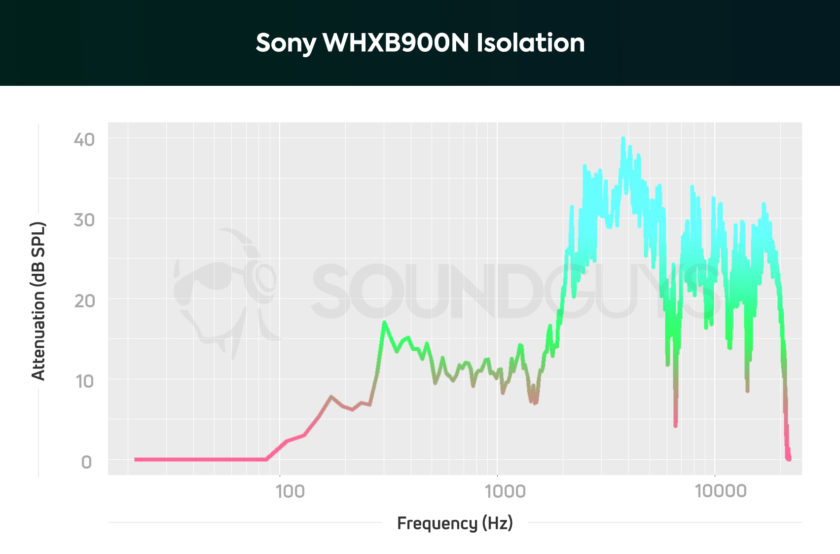 The ANC effectively isolates the listener from his or her surroundings, but doesn’t outperform the WH-1000XM3.

Just like its big brother, the Sony WH-1000XM3, the Sony WH-XB900N boast grade-A noise-cancelling technology. Ambient coffee shop sounds and car engine rumbles alike will be attenuated by the ANC. That said, it still can’t touch the effectiveness of Sony’s flagship. For $100 less, though, it may be worth the sacrifice.

The Beats Studio3 Wireless also include ANC technology, which adapts to your surroundings. Sound and noise cancelling isn’t as impressive as we’ve seen with Sony’s headphones especially its flagship. Plus, Beats’ ANC headphones are $100 more than these. If you’re going to drop the extra Benjamin, go for the WH-1000XM3 instead.

Should you buy the Sony WH-XB900N?

If you’re content with saving money at the expense of noise-cancelling effectiveness, relative to the WH-1000XM3, yes. However, these retail for $250 and the WH-1000XM3 can often be found on promotion for ~$300. If you’re between a rock and a hard place, it’s worth spending $50 more for the flagship headphones. Sound reproduction is more accurate with the same Bluetooth codec support.