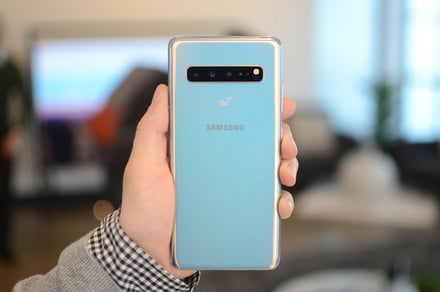 Despite the slow rollout of 5G network infrastructure, Samsung is trying to do its part to get superb 5G and A.I. technologies in consumer hands as quickly as possible.

The electronics giant has announced the mass production of 12-gigabit LPDDR5 mobile DRAM in 6 and 12 GB capacities. While many high-end phones currently on the market, including the Galaxy S10, utilize the previous generation of LPDDR4X DRAM, Samsung says this latest chip evolution will bring optimized support for 5G and A.I. applications. The 12 GB configuration will facilitate transfer speeds of up to 44 GB of data in only 1 second.

Those are some pretty wicked-fast speeds, and Samsung says it’s ready to ramp up production on these chips if interest is high enough in the global market. Consumer interest in such killer transfer speeds could be quite high if these numbers can hold up and achieve the 5,500 megabit-per-second transfers claimed in Samsung’s report.

The company said this latest chip is up to 30% more efficient than its LPRDDR4X predecessor, while also being 1.3 times faster on the same second-generation 10-nanometer process. This is thanks to a new circuit design with “enhanced clocking, training and [a] low-power feature” that allows its new mobile DRAM to enable next-gen flagship smartphones to “fully leverage 5G and A.I. capabilities like ultra-high-definition video recording and machine learning, while greatly extending the battery life.”

While Samsung has little to do with the successful roll out of 5G infrastructure, devices harnessing the proper components to take full advantage of this mobile evolution will be paramount to its success in powering new technologies and doing so efficiently.

Nearly every major phone manufacturer is expected to release 5G phones through 2019 — with the exception of Apple— but it may not be until the 2020 launch of the rumored Galaxy S11 that we see this technology make its way into our hands.

Until then, we’ll have only the dream of such lightning-fast data speeds on our phones – much like most of the U.S. now, which is awaiting proper 5G coverage. This won’t stop Samsung from pushing forward, though, as it has stated its plans to also develop a 16Gb LPDDR5 next year.