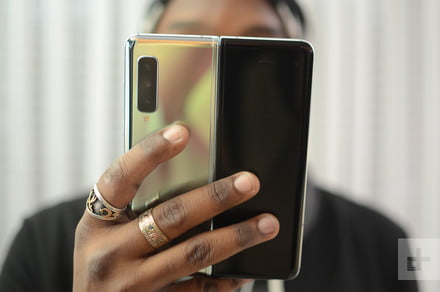 The Samsung Galaxy Fold is back! After some major screen issues that sidelined the device, Samsung’s first foldable device will be re-released in September 2019. With flagship specs, two incredible screens, and six camera lenses, it’s a beast of a device — but more importantly, it heralds the introduction of a new age of smartphones.

But just because it’s the next big thing doesn’t mean you should abandon the current spate of great smartphones to embrace the fold. If you’re looking for a powerful Samsung flagship with a huge screen, the Samsung Galaxy S10 Plus should also be on the list of considerations. So which should you buy? The futuristic Galaxy Fold, or the stylish and elegant Galaxy S10 Plus? We took a look to find out.

You’re paying the big bucks for both of these, so you’ll be happy to know you’re getting the best hardware. Both phones run this year’s flagship, the Snapdragon 855, and that means there’s a ton of power at your fingertips. With 12GB of RAM available, neither will disappoint in multitasking either and while the Galaxy Fold omits MicroSD expansion, 512GB of storage means you’re unlikely to need it.

There are similarly sized batteries here too, and you’ll comfortably get a day’s use out of both the S10 Plus’s 4,100mAh battery and the Galaxy Fold’s 4,350mAh capacity. Unfortunately, charging is a bit slow, being restricted to QuickCharge 2.0 — but there’s also the convenience of Qi wireless charging.

As they both have the same specs, this is really too close to call.

The Galaxy S10 Plus represents everything great about smartphone design in 2019. The glass-clad body is beautiful and elegant, while slim bezels mean the display encompasses almost all of the front of the screen. The selfie lenses are contained within the display’s hole-punch — a design solution that forgoes the need for a notch.

Where the S10 Plus is a modern beauty, the Galaxy Fold is a futuristic marvel. Folded, it’s quite the thick chunk, with large bezels surrounding the 4.6-inch display. But unfold it and you’re staring at a massive 7.3-inch display — a reveal that’s going to be hard to get bored of.

So they’re both beautiful, but are they durable? The Galaxy S10 Plus is as durable as you’d expect a glass phone to be. Slap a case on it, basically. But there’s some serious waterproofing thanks to an IP68-rating. The Galaxy Fold lacks any waterproofing, and we have concerns about the strength of the hinge. That’s without bringing up the various display problems suffered by reviewers.

Anyone will agree — both phones are stunning pieces of design. But the Galaxy S10 Plus’s waterproofing and generally stronger design win the category.

On paper, this seems unfair — the Galaxy Fold has two displays after all. The outer display is a 4.6-inch Super AMOLED running a 1,680 x 720-pixel resolution. It looks incredible, but it’s certainly on the small size for the resolution, which means content can look cramped. The inner 7.3-inch Infinity Flex Dynamic AMOLED display is anything but cramped, and it is utterly gorgeous, running a huge 2,152 x 1,536-pixel resolution. However, there is a crease where the display bends, and though it’s not hugely noticeable, it’s definitely there.

Samsung’s flagship phones are equipped with some of the best cameras in the business, and these two are no different. Both phones have the same triple-lens setup on the rear, comprised of a 16-megapixel ultra-wide-angle lens, a 12-megapixel variable aperture (that changes the size of its opening to match the available light), and a 12-megapixel telephoto rear. It’s a versatile and powerful setup, and it’ll give you the tools you need to capture a variety of situations. You’ll also be able to capture 4K video at 60 frames-per-second.

It’s a dead heat on hardware and in this category, we can’t pick between the two.

No surprises here — both phones run the same software. No matter which you pick, you’ll find Android 9.0 Pie with Samsung’s One UI laid over the top. It’s not the busy skin Touchwiz was either — using One UI is a zippy, smooth pleasure.

But as ever with Samsung, updates are going to be a problem. Receiving an update to the next major Android version from Samsung often takes upwards of six months — even on the latest flagships. It’s disappointing Samsung continues to let consumers down in this regard, but at least it means neither of these phones has an advantage over the other. This is a tie.

The Galaxy S10 Plus is no stranger to special features. There’s Samsung’s A.I. assistant Bixby, the desktop-emulating Dex mode, Gear VR support, the in-display ultrasonic fingerprint scanner, and even more features Samsung has crammed in over the years. The Galaxy Fold has those features and more. It has a 5G model, the excellent App Continuity — which shunts content between the two displays when you open and close the device — and the ability to add a floating window for multitasking. It’s an excellent use for the massive screen, and we look forward to seeing more features like this as more foldable phones are released.

The Galaxy Fold is due to be re-released in September, after being postponed a few months to fix problems with the display. It will cost the staggeringly large sum of $1,980, and you’ll be able to buy it unlocked or from AT&T. It is expected to work with AT&T and T-Mobile.

The Samsung Galaxy S10 Plus starts from $1,000 for the model with 128GB of storage, but prices go all the way up to $1,600 for the 1TB model. It is available at lots of retailers and from all the major carriers.

We’ll level with you: The Samsung Galaxy Fold is a triumph of futuristic design, and once the design problems are ironed out (and the crease too), such phones will absolutely take their rightful place. However, we can’t really recommend spending almost a thousand dollars more for a phone that doesn’t do much more than the Samsung Galaxy S10 Plus. At the moment, the S10 Plus does everything the Galaxy Fold does — with a few notable exceptions, obviously — and does it for less.