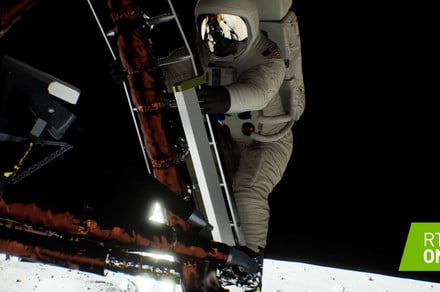 What was a small lunar step for man in 1969 has turned into a giant leap forward for computer graphics a half-century later. To commemorate the 50th anniversary of the Apollo 11 moon landing, Nvidia is showing the capabilities of its GeForce RTX graphics in a new demo that illustrates how the grainy images from the moon in 1969 that we’ve come to know would look if it had been captured today. Thanks to the power of real-time ray tracing, Nvidia had remastered those images by applying the principles of light to re-create the moon landing images with cinematic realism in a newly released demo of its RTX technology.

“With RTX, each pixel on the screen is generated by tracing, in real time, the path of a beam of light backwards into the camera (your viewing point), picking up details from the objects it interacts with,” Nvidia said of its new moon landing demo in a blog post. Nvidia claims that this project took its researchers more than five years. The team researched the details of the lunar lander, identified the properties of dust particles on the moon, and measured the reflectivity of the materials of the spacesuits worn by the astronauts.

That knowledge was then combined with Nvidia’s real-time ray tracing capabilities found on the RTX graphics cards to re-create the original scene in 1969, showing the sun’s rays emerging from behind the lunar lander and how it is reflected off of the surface of the moon and partially absorbed by the spacesuits worn by the astronauts Neil Armstrong and Buzz Aldrin.

Though real-time ray tracing remains in its infancy today, with limited support in game titles despite a big splashy debut late last year when Nvidia launched its GeForce RTX cards, the technology is often credited for bringing cinematic realism to scenes thanks to the way it is able to translate how light is absorbed, reflected, or refracted off of surfaces in real time. By using ray tracing, Nvidia was able to simulate how the sun’s rays react to every surface, the company said in a YouTube video highlighting this project, noting that the dynamic light and shadows gives us new perspectives on the moon landing. Nvidia’s latest effort to remaster the images from the 1969 Apollo 11 moon landing is not unlike its previous efforts in bringing more realistic details to older games, like Quake 2, by using ray tracing.

The graphics silicon-maker even showed Aldrin the re-created video. As the second human to walk on the surface of the moon, Aldrin appeared to be impressed with the technology. “I’ve got a photo that you can work on next — it’s called the first selfie in space.” Aldrin joked.