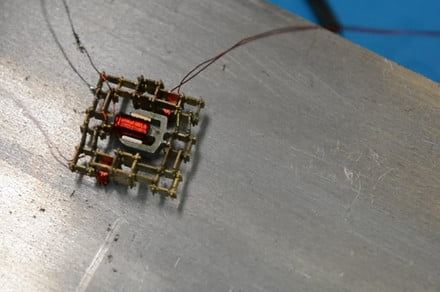 A mobile motor created by a team at the Massachusetts Institute of Technology (MIT) could change the way we view and build robots.

The robot consists of five tiny fundamental parts that have the ability to assemble and disassemble into different functional devices — with the end goal of having it build other, larger robots.

MIT Professor Neil Gershenfeld, who was a part of this groundbreaking project, said that he based the concept of how all forms of life are made up of 20 amino acids.

It’s groundbreaking in the sense that the new system is a step closer to creating a standardized set of parts that could be used to both assemble other robots and to adapt to a specific sets of tasks.

MIT’s tiny motor walks back and forth across a surface. Neil Gershenfeld/MIT

Through the use of a tiny kit of parts, Gershenfeld, along with MIT graduate student Will Langford, created a motor that replicates muscle movements such as walking. It also has more advanced abilities, like being able to turn a gear wheel. Gershenfeld calls these “micro-Lego parts.” The robot is strong: it can lift seven times its weight. Even with all these capabilities, the motor can reassemble itself as specific needs change or it tackles different tasks.

“Along with structural parts, Will is making tiny building blocks that contain even smaller integrated circuits,” Gershenfeld said.

Langford presented the work Wednesday at the International Conference on Manipulation, Automation and Robotics at Small Scales in Helsinki, Finland.

“People have responded well at the conference,” Langford said. “In large part, it is thinking on a higher level than what a lot of other people are currently thinking in robotics. It adds a layer of abstraction.”

The tiny robot turns the gears of another machine. Neil Gershenfeld/MIT

“People we have talked to have said it’s very liberating for the industry,” Gershenfeld added.

Langford said that the ultimate goal of the project is for this type of motor to make more of itself.

“Think of a 3D printer that can make electronics and robots…that’s very much where this is headed,” Gershenfeld said.

Its impact on the robotics world could create a make it easier for people to design and build their own robots, even if they lack extensive engineering expertise.

“Because it is a direct right process, you don’t need advanced skills and a complex supply chain,” Gershenfeld said. “It will help make robotics accessible to people.”