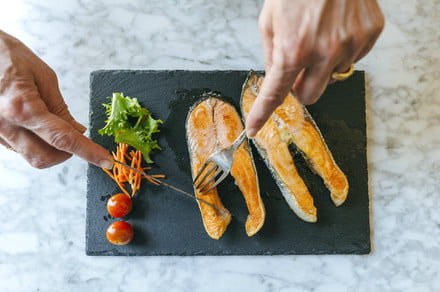 Impossible Foods, the company behind the Impossible Burger, is working on another meatless product: Fishless fish.

The fishless fish is in development to respond to the growing demand for plant-based food and to help fight against the depletion of ocean populations, according to The New York Times.

Impossible Foods has already created a plant-based, anchovy-flavored broth, which is being used to make paella, but may also be part of Caesar dressing, according to the company’s CEO Pat Brown. The fishless fish will also include heme, a protein from genetically modified yeast that replicates the texture, taste, and aroma of beef for the Impossible Burger.

Whether fishless fish will have the same appeal as the Impossible Burger remains to be seen through, partly due to the poorer reputation of pork and beef in terms of production and effects on health. However, with 90% of the marine fish stock of the world already depleted by the commercial fishing industry, the need for fishless fish should not be ignored.

Fishless fish is the next step in Impossible Foods’ mission of developing plant-based alternatives for every animal-based food by 2035. It is unclear if the company will be able to achieve that goal, but Brown shared with The New York Times his confidence that the company’s Impossible Burger recipe may be tweaked to mimic other kinds of food.

Digital Trends crowned The Impossible Burger 2.0 as the overall winner of CES 2019. Impossible Foods, however, appears to be struggling to keep up with the demand for the breakthrough product, as there have been shortages of the patties from restaurant chains that have been serving them such as Red Robin and White Castle. The products will be sold in retail outlets within the year though, which will give customers another option.