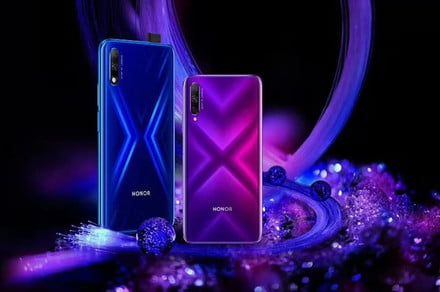 Honor has announced the Honor 9X and Honor 9X Pro. The two new smartphones have currently been unveiled only in China, but the company often goes on to release its new devices internationally. The midrange devices stand out because of a bezel-less screen and a pop-up camera, plus the first outing of Huawei’s new Kirin 810 processor.

The two are ready to do battle with Xiaomi’s Mi 9T/Redmi K20 phones, and here’s what you need to know about them.

Like the Honor 20 and Honor 20 Pro, the Honor 9X and 9X Pro share many similarities. First is the overall design — just take a look at that fantastic X shape on the rear panel, which we expect to use the same technique as the Honor View 20’s rear panel, giving it a deep, highly reflective finish. It’s great to see another Honor device family get some much-needed personality, which the Honor 20 range still lacks.

Both the 9X and the 9X Pro use the Kirin 810 processor, about which little is known, other than it’s built using a 7nm process. It’s paired with 4GB or 6GB of RAM inside the 9X, and 8GB of RAM in the 9X Pro. The 9X has a choice of 64GB or 128GB of internal storage, while the 9X Pro has 128GB or 256GB. Both have expansion opportunities using a MicroSD card.

On the front is a 6.59-inch AMOLED screen, but rather than go for a hole-punch selfie camera, the 9X series has an immersive screen without a hole, notch, or sizable bezels. Instead, the 16-megapixel selfie camera is housed inside a pop-up module, just like Xiaomi’s Mi 9T — a phone it’ll go up against — and the more expensive OnePlus 7 Pro.

The differences between the two arrive when examining the rear camera. The Honor 9X has a dual-lens camera with a 48-megapixel main lens and a 2-megapixel secondary depth lens, while the 9X Pro has a three-lens array. The 48-megapixel camera remains, as does the 2-megapixel lens, but it also comes with an 8-megapixel ultra-wide lens. Both phones have 4,000mAh batteries and operate on Android 9.0, and we expect Honor’s own version of Huawei’s EMUI, called Magic UI, to be over the top.

The Honor 9X will be the first to go on sale, with availability beginning on July 23 in China and prices starting at around $200 locally. The Honor 9X Pro will come on July 30 and cost from around $320.

What fate awaits the Honor 9X family globally? While Honor has released the Honor 20 and Honor 20 Lite in several markets, the Honor 20 Pro has still not arrived as promised, raising questions about the potential wider availability of the Honor 9X series. Eventual availability will likely depend on Huawei’s relationship with Google, which is threatened by the U.S.’s blacklisting of the firm. While both phones are listed as using Android, phones released in China do not use any Google services, which means Honor avoids the licensing problems it faces in Europe, the U.K., and other regions where Google services are considered essential. Honor has made no announcement regarding an international release at the time of writing.