From the moon to mass production: 10 pieces of modern tech indebted to Apollo 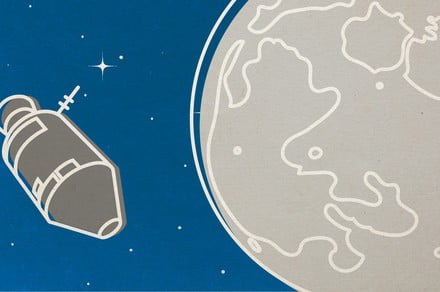 This article is part of Apollo: A Lunar Legacy, a multi-part series that explores the technological advances behind Apollo 11, their influence on modern day, and what’s next for the moon.

You may have heard that freeze-dried food was invented to feed astronauts on the Apollo missions, and although “astronaut ice cream” was never actually used during the operations, it was developed for NASA in the 1960s. Two other items people commonly believe originated with Apollo 11 are Tang and Teflon, but this is apocryphal — NASA isn’t responsible for your non-stick pans or your fruit drink mix. Nonetheless, there are plenty of things you use every day that have roots in the Apollo program. From emergency blankets to forward-thinking sneaker technology, here are some of the more infamous pieces of tech to have come out of the moon landing.

NASA didn’t create cordless power tools exactly, but it did help popularize and develop them. Power tool company Black & Decker debuted its first cordless power drill in 1961 and, soon after, NASA approached the company about creating a cordless rotary hammer drill which could be used for the Apollo program. The drill was needed to extract rock samples from the surface of the moon, where, unfortunately, no power sockets exist. In addition to the cordless nature of the drill, it also had to withstand extreme temperatures and zero-atmosphere conditions.

After successfully creating the drill, Black & Decker went on to create electric screwdrivers and other cordless tools. It also used the lightweight battery tech originally created for Apollo 11 to develop precision medical instruments designed to make operations easier for surgeons and safer for patients.

Fire is a tremendous danger to space missions, as they often involve pressurized environments with high levels of oxygen. The two components helped fuel a fire in the cabin of Apollo 1 during a launch test in 1967, killing three crew members. To prevent this kind of accident from happening again, NASA developed special materials for the protection of both astronauts and their ships. Monsanto, a well-known biotech company, developed a fabric called Durette, which is chemically treated so it does not burn. It also created a lightweight breathing system consisting of a face mask, harness, and air bottle, which was easier to put on and off than previous systems.

Both the aforementioned fabric and the breathing system form the basis for modern firefighting equipment, helping protect first responders from both fire and the dangers of smoke inhalation.

The so-called “moon boots” developed for astronauts to walk on the moon had to be padded for shock absorption; they also had excellent stability and motion control, so astronauts wouldn’t fall when walking over moon dust and rocks. An Apollo engineer named Al Gross, who worked on the boots, soon realized the innovative design could be applied to athletic shoes here on Earth.

Gross’ idea was to replace the plastic usually found in the sole of sneakers with foam, which could absorb the shock often associated with walking or running. He also wanted to add an external, pressurized shell using a process developed for spacesuit technology. In conjunction, these two advances allowed shoemaker AVIA to create a “compression chamber” in the soles of their shoes, which would ensure their sneakers last longer and remain comfortable while playing sports. This development later lead aerospace engineer Frank Rudy to approach Nike in 1979 with an idea for air-cushioned sneakers, paving the way for Nike Airs.

Solar panels first gained widespread recognition when they were used in 1958 aboard the Pioneer 1 and Explorer 6, the two satellites famous for capturing the first image of the Earth from space in 1959. But it was their implementation in the Apollo missions that really made solar power famous.

The Apollo cells were developed by Spectrolab — the biggest manufacturer of spacecraft solar cells today — but they were large and difficult to deploy. In fact, Buzz Aldrin had problems with deploying one of two cells on his historic mission and it had to be activated by ground control. These early cells didn’t produce much power and only lasted about a month before they stopped responding, but they paved the way for the development of the cells used worldwide today.

In order to provide drinking water for the long space missions, NASA needed a system to purify and recycle water. They contracted the Marquardt Corporation to develop a recycling system and to find a way to desalinize sea water. As a part of this work, researchers discovered an improved method of chemical processing, which could be used to remove toxic waste from used dialysis fluid.

This development of what is called “sorbent dialysis” improved kidney dialysis by making the process more efficient and easier to adjust for individual requirements. It also meant that home dialysis machines no longer had to be kept in a room connected to a water supply and drain, giving patients more freedom of movement and thus improving their quality of life.

In the mid-‘60s, as a prelude to the Apollo Lunar Landing Program, NASA developed digital image processing so that computers could enhance images taken on the moon. The processing allows the enhancement of hard-to-see subtitles and nuances in images.

Digital image processing is now used in a huge range of fields, especially in the medical sector. It is a fundamental part of the processing of images captured using magnetic resonance imaging (MRI), as well as computerized axial tomography (CAT scans), microscopy, and radiography.

The metallic blankets you often see wrapped around marathon runners and subjects in emergency situations are an offspring of NASA as well. The agency needed a way to protect delicate instruments from harsh space radiation without adding too much weight to the spacecraft. In turn, it developed an insulation barrier of aluminum foil over Mylar, which could protect both astronauts and equipment.

The same principal is used to create emergency medical blankets today, as well as mufflers designed to reduce the noise associated with engine exhaust.

The NRG Stadium, home of the Houston Texans, was the first NFL stadium to feature a retractable roof when it opened in 2001. The roof is made of fabric which can be deployed and retracted quickly – it’s also stronger and lighter than steel.

Birdair, Inc., a company known for tensile architecture, originally developed the roofing fabric for the Apollo spacesuits. It had to be strong, lightweight, long-lasting, reflective of heat, and resistant to moisture and extreme temperatures. The fabric is coated with Teflon to make it more resistant and is used in air-supported structures to reduce building costs by up to 30%.

Apollo technology continues to be used in technology breakthroughs today. Earlier this year, a Superelastic Tire was developed as an alternative to the pneumatic tires you find on cars and bikes. It is based on the Spring Tire developed by Glenn Research Center and Goodyear, which was first inspired by the tires found on the Lunar Roving Vehicle deployed during later Apollo missions.

Rather than being made of rubber, as most tires are, the Superelastic Tire uses shape-memory alloys which can be deformed by up to 10% and still return to their original shape. This means the tires can withstand large amounts of deformation without being damaged and don’t need to be inflated. In the future, these tires could be fitted to cars to prevent blowouts, as well as rescue vehicles which often need to travel over difficult terrain.

So next time you slip on your comfortable sneakers or use a cordless vacuum, remember that you have the moon landing to thank for your modern technology.