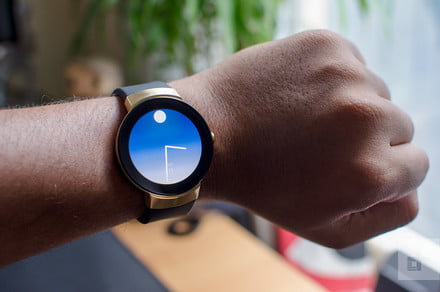 FCC filings are pretty short on design specifications, but mentions of the watch as “MOVADO CONNECT 2.0/40” in the documents lead us to believe the casing for the watch will come in at 40mm. With the original watching rocking in at a sizeable 46.5mm, that’s a significant downgrade in size. Still, it’ll most likely be a welcome change. There’s also mention of a leather and metal strap, so expect to have swappable straps too. The only color mentioned thus far is black.

We’re on firmer ground where the device’s specs are concerned. The processor isn’t explicitly named, but it will be powered by the Qualcomm APQ8009W, the application processor for both the Snapdragon Wear 2100 and the Wear 3100. Hopefully, the watch will run Qualcomm’s updated Wear 3100, as we’ve not seen enough smartwatches really adopt the new chip yet. The chances of the newer chip seem high though, as the other expected specs include 8GB of storage, 1GB of RAM, as well as support for Bluetooth, NFC, Wi-Fi, and an IPX8 rating for water and dust-resistance. That’s a fairly high spec watch, and we hope Movado would upgrade the processor to match. It’s also expected to run Wear OS 2.0.

There are a couple of potential weaknesses, though. Mentioned is a fairly small 300mAh battery, which is the same size as the battery in the original watch. While it proved capable in the first Movado Connect, the meager capacity may not be able to keep up with the upgraded internals. It also seems that the Connect 2.0 will have an LCD screen, rather than the AMOLED display from the first Connect.

There’s no mention of a potential release date, but if FCC certification is being cleared, then it’s a safe bet that the watch is on its way soon. Don’t expect it to come cheap though — Movado is a luxury watch brand, and it’s likely the Connect 2.0 will be priced to match its manufacturer’s reputation. The first Movado Connect was priced at $600 for the basic version, so don’t expect the Movado Connect 2.0 to come in any cheaper.

That’s all we know for the moment — we’ll keep you updated as we hear more.