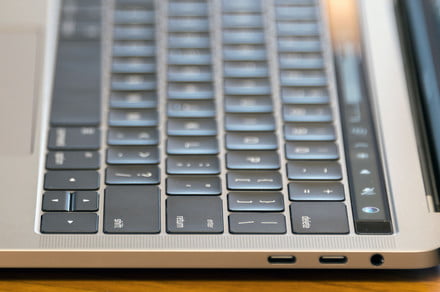 It’s no secret that Apple’s butterfly keyboards are something of a problem for its MacBook Pro laptops. They’ve been subject to three revisions, untold numbers of complaints and even an apology from Apple since making their debut in 2016, and rumors have been increasing that Apple is ready to throw in the towel.

That idea has gained more traction with the news that Apple has recently taken out two keyboard patents, including one on a new scissor-switch mechanism that could make it into future keyboards.

The first patent, for “Keycaps Having Reduced Thickness,” was filed by Apple on February 22. The second, for a “Low-Travel Illuminated Key Mechanism,” was filed on March 14. Both were published by the U.S. Patent and Trademark Office on Thursday, July 11.

The former features a scissor-key mechanism, something Apple has tried to abandon in favor of its own butterfly switch. The patent explains that keys may be tapped “several hundred thousand times, if not millions of times, over the life of a device,” and that it is often difficult to pair a “pleasing exterior appearance of an electronic device” with “the market demand for advanced functionality, improved durability, and reduced thickness and weight.”

With that in mind, Apple’s patent describes several ways of creating a durable keycap that comprises various layers, including a glass surface and light-emitting substances. In this case, Apple explains that the “glass” element could also be made of sapphire, ceramic or another scratch-resistant surface.

That Apple is reconsidering the scissor switch is an interesting thing to note, given its previous assertions that the butterfly switch provides “four times more key stability than a traditional scissor mechanism.” But it’s also not surprising, given the many, many times Apple has tried and failed to correct the problems plaguing the design.

Still, if the second patent is anything to go by, the company is not ready to completely abandon the butterfly switch and is still willing to consider ways it can be improved. Given how much time, effort and money Apple is likely to have poured into the butterfly switch project, that is perhaps not too surprising.

Whether or not these patents ever make it into future Apple products like the rumored 16-inch MacBook Pro is anyone’s guess — the company often patents ideas that never see the light of day — but they provide a useful insight into Apple’s thinking. If we learn any more about them we’ll keep you updated.