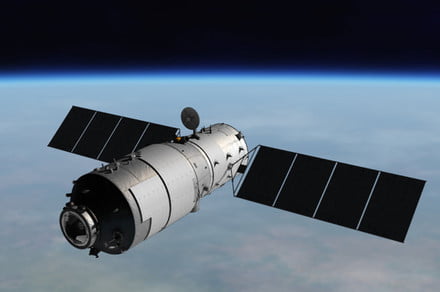 China’s small space station, Tiangong-2, has burned up in the Earth’s atmosphere as part of a planned deorbital maneuver.

It was launched in 2016 as a test bed for space technologies and was originally only scheduled to be in space for two or three years. But it survived longer than expected and has continued to be a venue for testing and for occasional manned missions. It has spent a total of nearly 1,000 days in space.

The space station weighed eight tons, making it relatively small by station standards. The space station’s planned deorbit was executed by putting it into a controlled descent into the atmosphere, where it broke up into small pieces. This space debris fell to Earth, landing in the the ocean in a region of the South Pacific

Chinese astronauts visited Tiangong-2 (which translates to Heavenly Palace-2) to perform scientific experiments in low gravity and to test out tools and equipment for tasks such as orbital refueling. But because the station was so small, especially compared to the International Space Station, it was apparently not the most comfortable of environments for the astronauts. Stays on the station were limited to one month.

Tiangong-2 was the successor to Tiangong-1, which was launched in 2011 and had an unplanned deorbit last year. Tiangong-1 was 10.4 meters (34 fee) long and weighed nearly 8.75 tons, and it was destroyed when its orbit decayed, causing it to break up into small pieces. Although this did cause some orbital debris to fall to Earth, as up to 10% of the station could survive re-entry, the pieces didn’t fall on populated areas.

Tiangong-2 is planned to be replaced by a new Chinese space station, which the China Manned Space Engineering Office (CMSEO) announced it intends to launch beginning with the core Tianhe-1 module in 2020. Two experimental modules for the station will be sent into orbit in 2021 and 2022, with manned missions and cargo spacecraft missions planned for 2021 and 2022 as well.

China intends to increase its rate of manned missions from the current one every two or three years up to five per year, an ambitious goal. The space agency is currently increasing recruitment for astronauts to man all of the planned future missions.