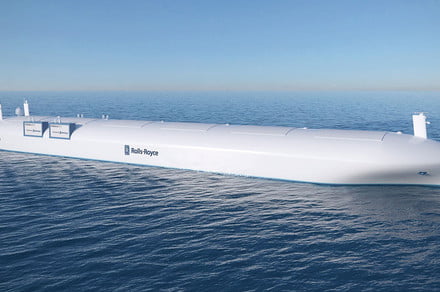 Picture this: It’s a stormy night in the middle of July and a 500-foot long cargo ship charges east through the Atlantic Ocean. There’s nothing unusual about the ship at first glance. The cylindrical vessel sports a futuristic design like a surfaced submarine, it’s sleek hull sculpted to slice through waves with ease. But step on board and things are out of the ordinary. The bridge is gone. The living quarters have been removed. There’s not a human crewmember in sight.

Cars may dominate today’s discussion about the future of autonomous transportation but some of the world’s largest maritime companies are betting big on autonomous shipping. Within the next decade, driverless ships like the one just described could be hauling cargo around the world.

Over the past few years, companies like Rolls-Royce Marine and Japanese shipping giant Nippon Yusen have shared plans to send remote and autonomous ships to sea. These ships will remain crewed to begin with, but as the technology advances, some of the ships may be crewless by as early as 2020.

“The technologies needed to make remote and autonomous ships a reality exist,” Rolls-Royce stated in a recent white paper on the topic. Sensor arrays built into ships allow them to analyze their surroundings with preternatural precision. Satellite data links let operators communicate with and control vessels from across the globe. Where driverless cars need to function without a human 100 percent of the time, tomorrow’s ships will likely blend driverless and remote-controlled functionalities. “There will be no single remote or autonomous ship solution but rather a hybrid of the two, which will depend on the type and function of the vessel,” Rolls-Royce said.

Autonomous ships offer a number of advantages over human-driven vessels, not least of which is a promise of improved safety. Human-error accidents are all too common and costly. Take, for example, the collision off the coast of Corsica on October 7, 2018, when the ferry Ulysse departed from the port of Genoa and cruised southeast through the Mediterrean Sea. The ferry’s captain stepped away from the station to take a phone call just before dawn. Moments later, the Ulysse rammed into the side of the CSL Virginia container ship. The container ship’s crew had moored the vessel in the middle of a merchant shipping lane deemed “inadequate” by investigators. The collision and subsequent oil spill were the result of multiple human errors.

Events like the Ulysse–CSL Virginia collision may become a thing of the past as self-driving ships all but eliminate the chance for human errors, which currently account for between 75% and 96%of all shipping accidents, according to Allianz Global Corporate & Specialty. The economic incentives are impressive. Human error has resulted in more than $1.6 billion in losses between 2011 and 2016.

Rolls-Royce was the first to demonstrate a driverless system for a commercial container ship last year.

Economic benefits are among the most compelling reasons for companies to shift toward autonomy. Although research and development costs will prove considerable, operational costs are projected to shrink for autonomous ship operators, who won’t have to pay people to be on board. Free from crewmembers, ships will be redesigned to be more efficient, since ship builders can eliminate accommodation structures such as the deckhouse and living quarters, as well as energy expensive functions like heating and cooking facilities. Crewless ships will undergo a radical redesign to eliminate excess features and increase efficiency and carrying capacity.

Today’s autonomous ships take many forms. Last year, in the Norwegian town of Sunde, Finnish company Wärtsilä demonstrated an autodocking system on Folgefonn, a coastal ferry whose captain cautiously took his hands off the wheel as his ship glided into the quay. The United States Navy and DARPA have meanwhile developed their own autonomous, sub-hunting warship capable of sailing the seas without crewmembers for months on end.

Commercial shipping giants like Nippon Yusen and Kongsberg (which acquired Rolls-Royce Marine in April) are also beginning to send autonomous ships to sea. Nippon Yusen, Japan’s largest marine shipping company, told Bloomberg in 2017 that it planned to test a remote-controlled vessel in a Pacific voyage this year.

However, it’s the short-range operations planned by Kongsberg partner Yara, a Norwegian chemical company, that will likely be this technology’s primary use in the near future. Yara Birkeland, a 260-foot autonomous container ship currently in development, will follow short and specific paths through Norway, carrying chemicals and fertilizer from Yara’s production plant to nearby towns. The company has said it plans fully autonomous trips by 2020.

Rolls-Royce, meanwhile, was the first to demonstrate a driverless system for a commercial container ship last year. In December, the company demonstrated its autonomous system in a test that entailed using a network of cameras, LIDAR, and radar to identify and avoid a stationary obstacle in the water. The system is also designed to assist in docking. Mikael Makinen, Rolls-Royce president of commercial marine, said the test marked “a huge step forward in the journey toward autonomous shipping and reaffirms exactly what we have been saying for several years, that autonomous shipping will happen.” Previously, Rolls-Royce said it aimed to launch short autonomous runs in 2020 and “completely uncrewed vessels on the high seas” by 2025.

Of course, for all the promises autonomous shipping offers, the transition will unlikely be seamless. Regulation for autonomy seems to trail behind the technology. Questions abound and mirror those with self-driving cars. How much regulation is needed? Who is liable in the case of a collision? And how will national and international regulations entwine?

And although driverless ships effectively remove human error, they won’t bring the risk to zero. Autonomous ships “have the potential to reduce human-based errors, but at the same time new types of risk will arise and will need to be addressed,” writes Rolls-Royce. That is, the possibility of an accident will remain, even if human crewmembers are long gone.