Astronomers have spotted a moon forming around a proto-Jupiter 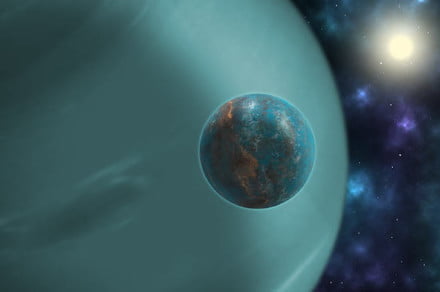 Artist’s impression of an exomoon orbiting a giant planet. Sci-News.com

Astronomers have spotted a young planet with a disk of gas and dust around it similar to the one from which the moons of Jupiter were born. The planet PDS 70 b is a gas giant several times the size of Jupiter which is in the process of forming and is located about 370 light-years away in orbit around the dwarf star PDS 70.

“Planets form from disks of gas and dust around newly forming stars, and if a planet is large enough, it can form its own disk as it gathers material in its orbit around the star,” astronomer Andrea Isella, lead author of the paper, said in a statement. “Jupiter and its moons are a little planetary system within our solar system, for example, and it’s believed Jupiter’s moons formed from a circumplanetary disk when Jupiter was very young.”

But these circumplanetary disks don’t last for long. They are believed to disappear within 10 million years, and that means there hasn’t been such a disk within our Solar System for 4 billion years. In order to study the disks, the astronomers had to hunt much further afield, looking for young stars with planets forming around them. Only a few planets have ever been found within disks.

The discovery was made using the Atacama Large Millimeter/submillimeter Array (ALMA) in Chile, a huge array of 66 radio telescopes which work together to detect electromagnetic radiation in the millimeter and submillimeter wavelengths.

A color-enhanced image of millimeter-wave radio signals from the ALMA observatory in Chile shows a disk of gas and dust (right of center) around exoplanet PDS 70 c, the first-ever observation of the kind of circumplanetary disk that is believed to have birthed the moons of Jupiter more than 4 billion years ago. A. Isella, ALMA (ESO/NAOJ/NRAO)

The data gathered by ALMA supported previous findings using the Multi Unit Spectroscopic Explorer (MUSE) and the Very Large Telescope, which observed visible light wavelengths which are emitted when hydrogen becomes ionized when it falls onto a star or planet. Between these two data sources, Isella is confident that the planet PDS 70 b is there.

By observing planets with circumplanetary disks, we could learn more about how both planets and moons form: “There’s much that we don’t understand about how planets form,” Isella said. “And we now finally have the instruments to make direct observations and begin answering questions about how our solar system formed and how other planets might form.”

The findings are published in Astrophysical Journal Letters.