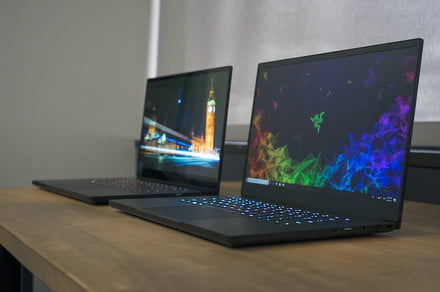 Gaming laptops these days usually come in two display options: 1080p and 4K. One’s for high framerates in games, the other is for sharpness in consuming and creating content. But with the power of modern gaming laptops, there’s a curious hole missing from the available options. QuadHD, or 2,560 x 1,440p resolution.

PC gamers have long known that 1440p is the sweet spot for performance and visual fidelity, so my question is simple: Where are all the 1440p gaming laptops?

A cursory look at any gaming laptop listing will show you that 1,920 x 1,080 with a 144Hz refresh rate is currently the preferred display option by most manufacturers. The reason is simple. Even though laptop GPUs have grown by leaps and bounds, they are still quite limited compared to their desktop kin. Turns out that 1080p is a perfect resolution for even the lowliest mobile GPU, the GeForce GTX 1050, to provide a playable gaming experience with medium to high settings.

Move to more powerful GPUs like the RTX 20-series, though, and you’ll be flying along at well over 100 FPS in most games. At this point, a high refresh rate display really makes sense as it can handle all those speedy frames with no stuttering or tearing.

Additionally, a look at Steam user hardware stats reveals that 62% of gamers are playing with a display resolution of 1080p. This is a staggering number especially when compared to the paltry 4.68% of players running a 1440p resolution. From those statistics alone, it’s not hard to see why manufacturers would focus on the more commonly-used resolution.

Well, yes and no.

4K certainly brings a huge improvement in image quality. In the home entertainment business, 4K has quickly become the standard for the average TV. And with more people owning an Xbox One or PlayStation 4, 4K gaming is more mainstream than ever. It might not actually be rendering in native 4K, but for the average person, it’s close enough. Almost every 4K TV now even ships with a dedicated game mode to boost performance when connected to a console.

However, you pay a steep price for that higher resolution. Even powerful desktops with Nvidia Geforce RTX 2080 still struggle to run some games at 4K Ultra settings at over 60 FPS consistently. And let’s not forget you still need to shell out a decent sum to buy a good 4K display. And the results are undeniable; players aren’t willing to give up framerates (or cash) for visual clarity. The same Steam survey shows only 1.6% of players run games at 4K.

Now, if you consider that the laptop variants of GPUs, although better than ever, still run significantly slower than their desktop counterparts. Even the RTX 2080 Max-Q, which is the most powerful GPU currently available in laptops, is anywhere from 30-50% slower than the desktop equivalent. It’s unlikely then to expect any gaming laptop to handle 4K gaming smoothly.

Our own tests confirm this; even with monstrously powerful laptops like the Alienware Area-51m will have a hard time running games in 4K beyond 60 FPS at the highest settings. And that machine commands a hefty price well out of reach for most consumers. Clearly, 4K gaming laptops are not really made for 4K gaming.

So, you might be thinking, “why not just buy a 4K laptop and play at 1440p resolution?” Well, you certainly can, but that’s not certainly a good value. A typical 4K gaming laptop will cost significantly more than a 1080p one for two key reasons; the higher resolution panel and the graphics card bundled with it. A quick look at Razer’s laptop configurator shows the price difference clearly.

The base 1080p model with a 144Hz refresh and RTX 2060 starts at $2,300 while the 4K model can only be had with at least an RTX 2070 Max-Q costs $2,900. The same applies to Alienware’s pricing options. That’s a whopping $600 more for a resolution you can’t actually game at 60 FPS — and that’s not even saying anything about the cost to your battery life to power that high-resolution screen. Ultimately, these 4K gaming laptops aren’t made exclusively for gaming — they’re meant for content consumption and creation. If that’s not necessarily what you want to do with your laptop, you’re leaving a lot of value at the door.

So, 1080p displays give us the highest performance but at the cost of visual fidelity. 4K gives us the fidelity but the price to performance requirements are too high. 1440p, however, would a perfect resolution for gaming laptops that are currently overpowered for 1080p gaming but underpowered for 4K. It offers the right middle ground where performance is guaranteed with imperceptible loss in visual quality.

PC gamers have always found 1440p to be the perfect sweet spot for great performance without compromising visual fidelity. Take a look at our favorite gaming monitors.  Several of them are 1440p high-refresh monitors. At this resolution, most graphics cards that can output 40-60 FPS in 4K easily double that at 1440p to a very comfortable and consistent 80-120 FPS.

Don’t believe me? Let’s look at some benchmarks from one of our reviews of the Razer Blade 15 with RTX 2070 Max-Q. It’s compared to an Asus Zephyrus S GX701 with an RTX 2080 Max-Q. And finally, an Origin RTX Millennium desktop with a full RTX 2080 Ti.

Looking at the numbers, it’s clear the two gaming laptops perform about 40-50% less than the desktop machine. But what’s clear here is that both laptops struggle to reach 50 FPS in 4K. When the resolution is dropped to 1440p, we see significant boosts in both mobile GPU performance. Almost 50%.

We’ve seen some very relevant arguments for 1080p displays; manufacturers will wisely focus their development efforts around what will sell the most. And clearly, what sells is fast, cheap 1080p displays. The market has seen an influx of faster 144Hz and even 240Hz refresh displays — but all still in 1080p.

Led by the television market and the increased availability of high resolution content, 4K displays have clearly made an impact in gaming laptops. Beyond just 4K, 2019 also looks to be the year that 4K OLED screens will become mainstream with several offerings from Razer, Dell, Lenovo, and HP on the way.

In spite of all this exciting innovation, it’s certain that for the foreseeable future, gaming laptop manufacturers and display makers will continue to skip the optimal 1440p displays in favor of the other two resolutions. For now, gamers who want to take advantage of the power they have in their laptops without compromising fidelity will simply have to drop in-game resolution to 1440p. That, or use a fast, external 1440p monitor like this one. It’s a shame, but until gamers upgrade to faster graphics cards and monitors, that’s not likely to change anytime soon.